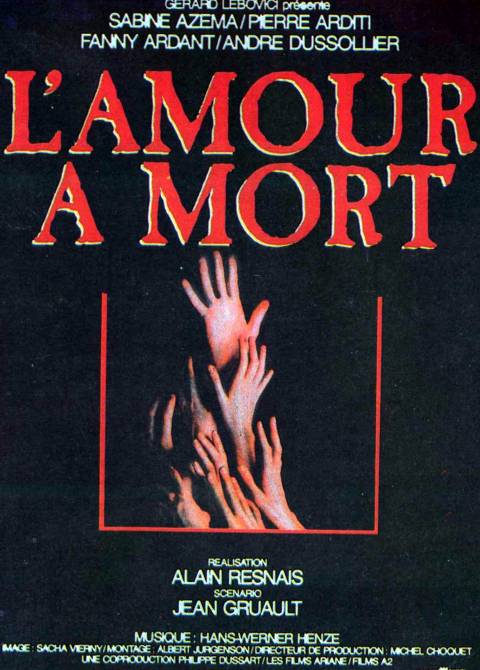 LOVE UNTO DEATH (L’AMOUR A MORT)

Acclaimed French director Alain Resnais (“Muriel”/”I Want to Go Home”/”Mélo”) helms this personal film that is a slow-paced intellectual teaser that wrestles with discovering more about love and death than meets the eye. It’s written as an intense psychological drama by Jean Gruault, in his third and last collaboration with Resnais. The filmmaker uses a number of formal devices to explore both the religious and philosophic themes he offers as a meditation. He divides the film up into “movements” and intersperses at the end of each movement a completely dark background image and then follows with an image of drifting particles looking like falling snow, and accompanies that by the striking avant-garde chamber musical interludes of Hans Werner Henze. The result is a puzzling metaphysical trip as to how one should approach life, love and death. This is Resnais’ even more experimental and problematical follow-up to Life Is a Bed of Roses, using as its four leads those who also were in that film.

Archaeologist Simon (Pierre Arditi) and botanist Elizabeth (Sabine Azéma) are a loving atheist couple living together, who are not married and only hooked up a few months ago. In the opening scene, Simon is declared dead by a doctor but miraculously recovers. This leads to a dinner discussion on the nature of death and if death will leave lovers separated from each other forever as the couple mull this over with their compassionate true believer neighbors and best friends, the Lutheran clerics Judith (Fanny Ardant) and Jerome Martignac (André Dussolier). The married couple for ten years and with two children, are upset that one of their worshiper’s committed suicide and point to the God of the Bible as the only way to find relief from this world’s troubles.

In this morbid film, grimness is the easiest mood to react to. When this time Simon keels over for good and Elizabeth can’t bear to live without him, she plans her suicide in the hopes of joining him in the afterlife. The clerics try to console her and thereby in the process go soul searching for their own beliefs on how they read the Bible–which they end up interpreting differently. Judith finally asks why isn’t it possible for others to accept the love someone may choose, even if it doesn’t conform to their own set beliefs, could be dangerous and doesn’t seem to make rational sense.

Though the film is more a discourse on academic themes rather than a fluid cinema experience, it left a lot to muse over that most films will never even put on their radar. This superbly acted play posing as a film, hit the right notes on the left side of my brain and I went into an intellectual rapture over its heady speculations despite its entertainment value being minimal and that it dug itself into an intellectual hole by offering too much that amounts to being not assimilable.