Based on a play by Ted Allan, writer-director John Cassavetes’s “Love Streams” is a risk taking highly emotional drama about love, loneliness, making a connection and desire. It’s uniquely realized in John Cassavetes’ depiction of love as a steady, endless stream that includes in its flow among the usual love descriptions things that can’t be defined such as madness, what’s incomprehensible and what’s self-destructive. It’s Cassavetes not as shapeless as he usually is, but still offering little plot and acting that feels theatrical but still improvised (I might add the acting is brilliant from the leads). The amazing thing is that despite the oblique treatment of the subject-matter, Cassavetes gets close to his eccentric subjects’ inner drives and sadness. It’s a compulsive film that provides a balancing act for a woman who loves too much (Gena Rowlands, wife of the director) and her brother (John Cassavetes) who doesn’t love enough. Though still under-appreciated for what it is and what it tried, it’s a film whose power can’t be denied and whose nutsy characters exert excitement as they search for identity and the other.

Robert Harmon (John Cassavetes) is a Los Angeles best-selling novelist of lurid romances. He arrives home during the afternoon dressed in formal evening attire to find a number of young prostitutes cutting up as they await his return to use them for his unorthodox way of researching his subject of “night life” for his next novel. Robert says you need someone to be with to have a good time, and then asks one of the pretty gals: “What’s a good time?” But only comes up with her disinterested response that she has a good time cooking. What follows is Robert pursuing an empty life devoid of real intimacy, as he goes night clubbing, drinking, chasing skirts and getting into a number of casual affairs that never amount to much. The scene switches to Chicago where Robert’s sister Sarah Lawson (Gena Rowlands) is involved in a messy custody fight with her estranged husband Jack Lawson (Seymour Cassel) over their young daughter Debbie (Risa Blewitt). In a conference room, Judge Dunbar (Joan Foley) tries to wrap things up quickly in the divorce hearing. However, Sarah mentions her intention to ignore a mutually pre-arranged custodial agreement and plans to take their daughter to Houston and New York in order to visit members of Jack’s family who are suffering from ill health. She justifies her strange actions by saying, “You might say that’s what I do. I visit sick people.” When the judge calls her out on this, Sarah faints in a nearby office. Ordered to receive psychological help, her shrink tells her to go to Europe to meet someone new or else she’ll be back in the bughouse. So it’s off to France.

The second half of the film has Robert chasing after sultry nightclub singer Susan (Diahnne Abbott) and getting an unexpected visit from his 8-year-old son (Jakob Shaw), dropped off by his ex-wife (Michele Conway) for him to baby-sit for the weekend. He’s a son he hasn’t seen since he was born, and dad makes an effort to get to know him as he gives the boot to his research hooker girls. But the effort is an exercise in irresponsible parenting, as he plies the kid with beer and an ill-advised trip to Las Vegas. Sarah’s ex-husband Jack also appears. Sarah, who returns from Europe to stay with her brother, excitedly says ”Jack? I’m almost not crazy now.” That might be true but she brings along with her two horses, a goat, a duck, some chickens, a dog, and a parrot to live with them in the Hollywood Hills house, and if that isn’t crazy then no one is crazy.

The drama centers on Robert and Sarah, both who must learn to deal with their weaknesses, dramas and sad lives without confusing their emotional substitutes for love. Eventually the loving Sarah meets Ken (John Roselius) and on the night of a severe rainstorm takes her belongings to go live with him. Alone in the house Robert waves with his hat out the window to the only female he trusted and can communicate with (meaning they have found a love between them that no words can express). The last scene is symbolically played as if Cassavetes is saying adios to sis and the movies, after an inspired career as a daring filmmaker.

Mr. Cassavetes in his incontrovertible style of filmmaking shows that anyone can know what love is if they really want to, and that he executes this original drama so that though everything might seem odd it nevertheless jells with accomplished technical skill and brilliant insights into the human condition. 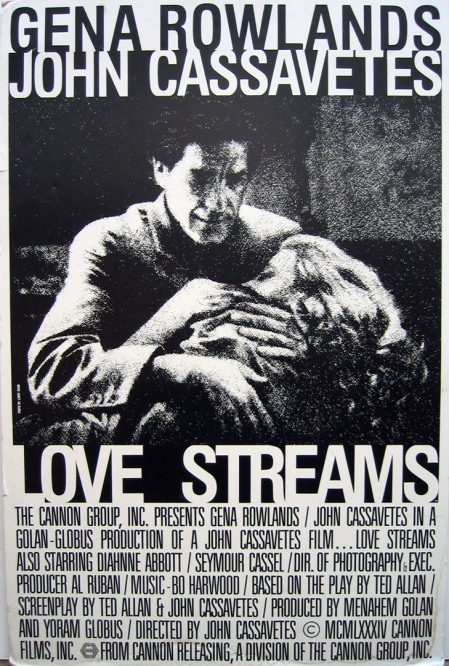