LOVE IS A RACKET

Another enjoyable snappy newspaper story of the period when papers were most influential in the 1930s. It’s another pic where the hero is a gossip columnist modeled after the famous Broadway gossip columnist Walter Winchell, even though here the columnist is portrayed in a not so Winchell-like subdued sophisticated manner.

It’s based on the novel by Brooklyn newspaperman Rian James. The script is by Courtney Tennett. Prolific director William A. Wellman (“Wings”/”The Public Enemy”/”The Ox-Bow Incident”) keeps it fast moving and breezy, even during a murder, and gets the most drama and comedy he can get out of it. The talented cast, headed by Douglas Fairbanks, Jr., all give winning performances. Wellman does a nice job highlighting the amoral Broadway scene, where gangsters mingle with celebs, theater people and socialites in swank restaurants like Sardi’s. The effective and unpredictable pre-Code pic gives the viewer a curious peek at how Broadway looked back during the Depression.

At the New York Globe Jimmy Russell (Douglas Fairbanks, Jr.) is the top columnist, writing the ‘Up & Down Broadway’ column. His legman is the loyal fun-loving Stanley Fiske (Lee Tracy). The pretty 22-year-old aspiring actress, Mary Wodehouse (Frances Dee), raised by her protective Aunt Hattie (Cecil Cunningham), who says “men want to take all they can get or don’t have anything to give” and has little use for low wage earner newspaper people, warns Mary to get a man who can afford to give her a luxury life and an apartment on Park Avenue. Thereby Mary gives the smitten Jimmy the brush off, except when she can use his services to get publicity for her acting career. When passing bad checks for $3,000 to Park Avenue merchants, she asks Jimmy’s help. But since Jimmy doesn’t have the funds to square things, Mary secretly meets with Jimmy’s gangster acquaintance, Eddie Shaw (Lyle Talbot), and he takes care of the bad checks. The Globe runs a story about Shaw’s milk racket, which Jimmy promised wouldn’t happen since the racketeer works with him on feeding stories and knows the danger if he crosses Shaw. This brings a visit from Shaw’s enforcer Bernie Olds (Warren Hymer) and Jimmy gets the city editor to kill the story before the paper hits the streets. Meanwhile Shaw schemes to get Mary to meet him in his penthouse apartment and Jimmy is once again asked by Mary for help. When Jimmy goes to Shaw’s apartment he finds him on the floor dead and Aunt Hattie hiding her murder weapon in a flower plot. The fast thinking columnist makes it look like Shaw was drunk and heaves the corpse over the 18th floor terrace. The cops call it an accidental death. When back in his apartment, Jimmy receives a telegram that Mary eloped with the 50-year-old foreign-born theatrical producer (Andre Luguet) and would be starring in his latest play after the honeymoon. Realizing Mary played him for a sucker, he cheerfully calls the gossip item into his paper and tells his smiling guest, Sally (Ann Dvorack), the woman who loves him, that love is a mental disorder or a racket. After saying he will never love again, he mischievously winks at Sally.

The pic does a good job mixing together comedy, romance and melodrama. 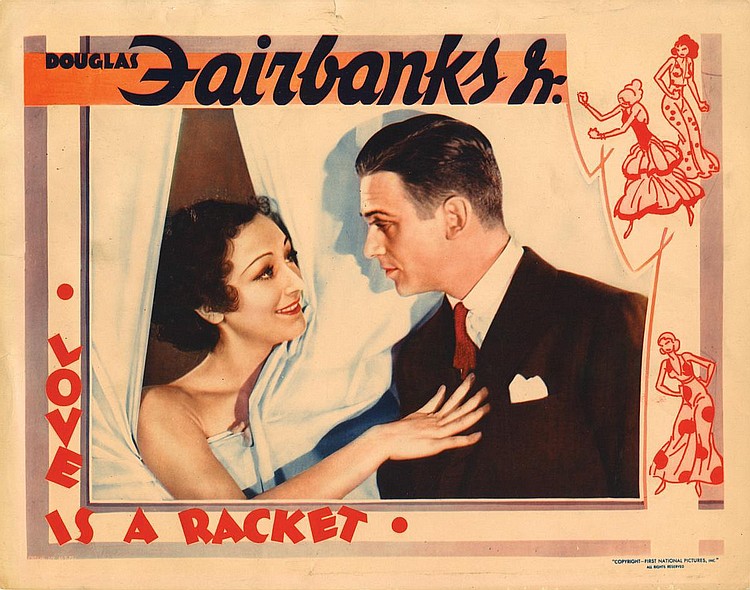