Misfire spoof on LA’s funeral industry, American greed and Brits in Hollywood. It’s based on Evelyn Waugh’s 1948 acidic short novel and directed by noteworthy Brit filmmaker Tony Richardson (“Look Back in Anger”/”The Entertainer”/ “A Taste of Honey”), who never reins in the wealth of material and as a result it’s a chaotic mess that got out of control. Terry Southern and Christopher Isherwood’s heavy-handed script further sabotage the satire. The Black and white film became unwieldy and had no flow, but it’s a sight to see how low it sunk. A miscast Robert Morse is unappealing playing a visiting English wannabe poet, as he makes his character into a sleaze without being funny. But the following actors offer wacky cameos and make the film at least watchable: Milton Berle and Margaret Leighton are a well-adjusted wealthy American couple who grieve in their own funny ways over their dead dog; Rod Steiger is an eccentric embalmer; Ayllene Gibbons is his bedridden fat mother, who has orgasms from just watching food in TV commercials; Jonathan Winters is a pip in a double role as the charlatan funeral owner and his twin running a pet cemetery; Lionel Stander as a cigar chomping, drunken, lecherous operator of a gay religious cult amusingly strains credibility using his usual gangster voice in the role of a spiritual person; and Liberace is fun as a casket salesman.

The penniless Dennis Barlow (Robert Morse) tells immigration officer James Coburn he won a free airline ticket as the tenth million visitor at a British airport and “It was either Los Angeles or Calcutta.” The naive Brit states he’s really a poet, but his last job was as an “artificial insemination donor.”

Barlow’s effete painter uncle, Sir Francis Hinsley (John Gielgud), a prissy art director for the movies, lets him stay in his dilapidated Hollywood mansion while the guest takes an unsuccessful turn at a few odd jobs. After being unceremoniously fired by his dopey studio boss (Roddy McDowall), Sir Francis hangs himself. The stuffy and obnoxious Sir Ambrose Ambercrombie (Robert Morley), head of the British community of Hollywood talent, gets his “British colony” group to pay for an elaborate funeral at the exclusive Whispering Glades Memorial Park (the real-life Forest Lawn)–the group’s aim is to always make their countrymen look good, no matter what. Whispering Glades is run by the shady capitalist, Blessed Reverend Wilbur Glenworthy (Jonathan Winters), who has his corrupt finger in many pies. While making arrangements for uncle’s burial, Barlow gets a job with Wilbur’s twin brother, Harry (also Winters), as a bereavement associate (which entails among his many grieving duties picking up the dead pets at the homes of the wealthy) at a pet cemetery called The Happier Hunting Grounds that Glenworthy also operates at a great profit and where his twin brother, after fired as a producer from the same studio as Barlow’s uncle, is in charge. Barlow soon falls for the cosmetologist Aimee Thanatogunos (Anjanette Comer), who is seduced by his poetry until she finds out it’s stolen. The dedicated worker is also wooed by Mr. Joyboy (Rod Steiger), the chief embalmer, but is turned off by his gluttonous mother. Asking advice from The Guru Brahmin (Lionel Stander) is of no help, as he’s too corrupt, so she tries the funeral director, the Blessed Reverend Wilbur Glenworthy. When he comes onto her with depraved proposals, she commits suicide by taking the embalming fluid.

When Barlow discovers that Glenworthy, in collusion with General Buck Brinkman (Dana Andrews), an Air Force general, plans to send all the bodies in the cemetery into space so he can build on the valuable ground a luxurious spa for retirees, Barlow substitutes, on a rocket invented by a child prodigy (Paul Williams), Aimee’s body for the dead astronaut and then acts to foil the scam before returning to England.

The outrageously crude film sets out to put the scalpel to the following: the shallowness of youth culture, American consumerism turning into gluttony, Oedipal relationships, American corruptibility, English snobbery, the fakery of organized religion, the bribing of the American military, the crassness of Hollywood, the odd ways Americans bury their loved ones, the greed of exclusive funeral homes and the degeneration of those titled Brits who have talent but can be bought by Hollywood to whore themselves out for a paycheck. The targets for satire are well chosen, but there are too many to hit them all with any sense of justice and not enough laughs are unearthed. 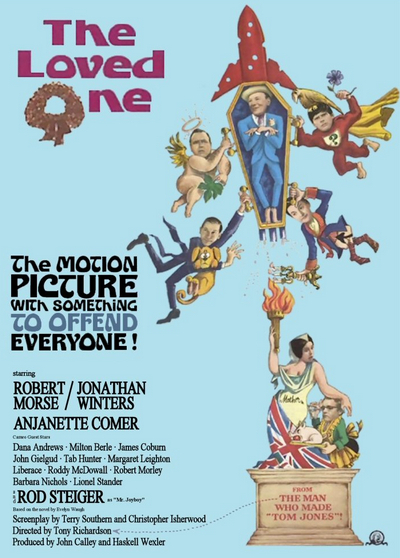