MAN ON THE MOON

An alluring biopic about the provocative comedian Andy Kaufman that couldn’t go futher than to provide an entertaining look at the entertainer. If one was looking to find out who Andy Kaufman was, this film would be of little help. The point being that there was probably no difference between the performer and the person off-stage, therefore by telling the story through only his performances should give one a good enough idea of Andy. Every other character besides Andy seemed wooden. Their only purpose was to look up and stare at Andy as if he were a God, or sneer at him as if he was the Devil. The Kaufman role was tailor-made for Jim Carrey and he comes through with flying colors in a virtuoso performance. This fictionalized biography of Kaufman shows his odd personality, obsessions, and comic mind-set.

The film seemed flat in the parts when Carrey wasn’t performing. But despite his bravura performance the story seemed superficial. I didn’t feel as if I knew him any better than I did before but, at least, the film didn’t try to answer something it couldn’t. “Man on the Moon” was entertaining, even for someone like me who has never been impressed by Kaufman’s comic talents.

The biopic about ‘the king of negative energy’ starts with a prologue, where Jim Carrey says “Hello … I am Andy.” Jim Carrey then convinces us without a doubt that is exactly who he is. He first shows us his abnormal childhood where he would play alone and perform his act before an imaginary audience in his room rather than play with other children, greatly upsetting his parents. Andy is raised in the affluent Long Island suburb of Great Neck, but before we can gather anything else about his childhood and his relations with his parents and his sister, we are quickly whisked from here to Andy as a young adult doing an unfunny act at a nightclub. We have no trouble seeing how Andy would be fired for not being funny, which is indeed what happens. Suddenly Andy turns up doing an Elvis impersonation at a comedy club attended by super-agent George Shapiro (DeVito), and he’s taken on by the agent who thinks he might have discovered a comic genius. Soon Andy becomes a star on ‘Saturday Night Live.’ From there he lands a starring role in a new sitcom, ‘Taxi,’ and is allowed to make a number of demands from the producers in order to land him. His M.O. is that he always tries to push the limits on what he can do. This might be the way his career happened but it made for bad cinema since his immediate rise to fame lacked credibility, even though we know it evidently did happen.

The heart of the film and indeed what keeps it lively, is watching Carrey go through his repertoire in a flawless comic manner. He seems to have all of Andy’s top acts down pat, as he has the ability to do impeccable imitations of Kaufman doing the following: the buggy wide-eyed immigrant Latka; the confrontational wrestler bullying the women he fights in the ring; his ongoing scripted spat with the wrestler Jerry Lawler; performing a reading of the entire “The Great Gatsby” to a bored college audience; performing as the obnoxious Tony Clifton (his alter ego), who is a lounge singer who goads his audience on in a hostile manner; and, acting childish while doing lip-syncs to a phonograph record of the “Mighty Mouse” theme song, as he would sing out “Here I come to save the day!” He thrived in his short-lived career in the 1970s until his death from cancer in 1984, at the age of 35, on being unpredictable because of his unique comedy.

Milos Forman’s uneven film somehow misses getting all of Kaufman’s true craziness. The crazy ingredient he gets is not from the conventional storytelling, but from Jim Carrey’s expressive performance. The film went from bursts of great energy with Carrey doing Andy, to dullness.

The most jejune part was reserved for Courtney Love as Andy’s girlfriend Lynne. Her part was so underwritten that there weren’t even hints of where the romance or sex in it was, there appeared to be no intimacy between them. She just seemed to be Andy’s prop, who looks delicious on the screen but was given nothing to do.

What we are left pondering is, if Andy is weird and gimmicky enough to invite a whole audience out for milk and cookies after he played out his dream of appearing in Carnegie Hall — If so, could he also be capable of faking his own death?

The film seems to be an unadulterated homage to Kaufman, looking on the rosy side of his lunacy and not getting at anything else. Kaufman seemed to always be searching for something, whether in studying Transcendental Meditation, looking for a psychic cure for cancer in the Philippines, or a way to push the limits of comedy to a further degree. What we see in the film is that he never quite found what he was looking for, in a career that was far too short for a man of his energies and talents. 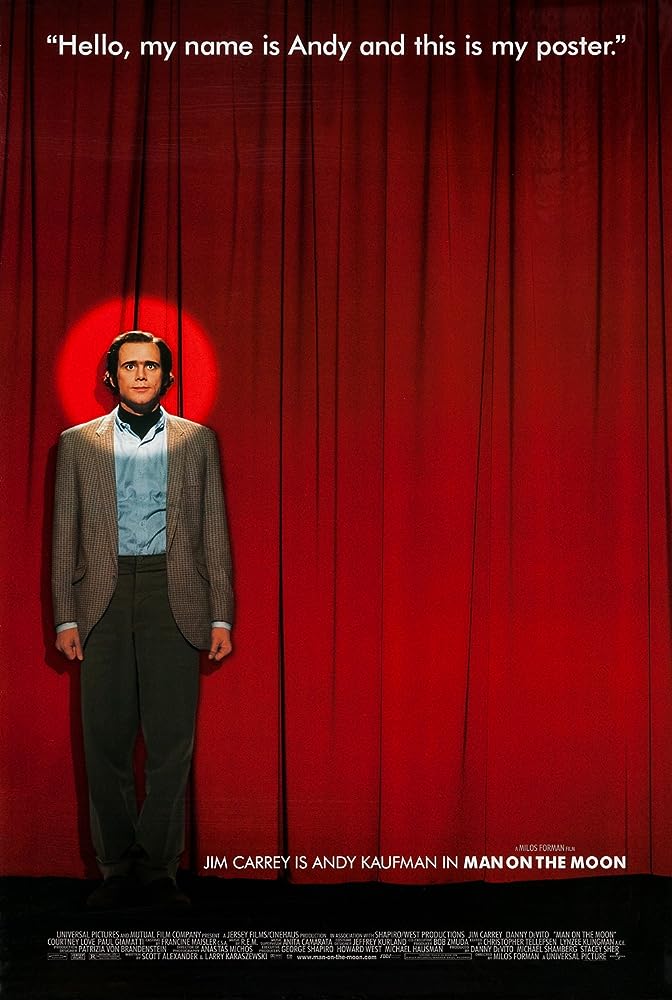