It still makes one of the strongest statements about alcoholism, though time has taken away some of its edge. Billy Wilder (“Sunset Boulevard”/”The Seven Year Itch “/”Some Like It Hot”) directs this original, intense and grim study of a hopeless alcoholic. Ray Milland won an Oscar for his gripping performance, showing that some men shouldn’t drink. It also received Oscars for Best Picture, Best Director, and Best Screenplay. It’s based on the novel by Charles R. Jackson and written by Charles Brackett and Wilder.

Don Birnam (Milland) is an unsuccessful writer dwelling in lower Manhattan with his no-nonsense but timid brother Wick (Phillip Terry). He’s suffering from writer’s block–which is given as the reason he drinks (in the novel the reason given is a depression over Don’s repressed homosexuality). The story covers a long three-day week-end, where the rude and overly aggressive 33-year-old is a no show to visit the country with his brother and have a sober respite. Instead he goes on a drinking binge when left alone. His nice but terribly naïve girlfriend Helen St. James (Wyman), who loves him when there’s every reason why she shouldn’t, and his brother Wick have tried everything to get him to stop, but are unable to get him off the booze.

The scenes that still hold their force are the ones capturing the bustle of New York, as seen through the stunning photography by John F. Seitz: where the crowded streets are filled with white noise; the “El” trains roar by overhead and the darkness of the night streets appear ominous as Milland flees from a sadistic male nurse (Frank Faylen) in the Bellevue alcoholics’ ward; the conversations in the neighborhood bar (filmed at McSorley’s Ale House on 7th St and 2nd Ave) with the disapproving bartender Nat (Howard Da Silva), who tells the untrustworthy drunk straight out at one point that “I don’t like you much;” the humiliation of being caught stealing money from a woman’s purse; a desperate Milland lugging his typewriter to the pawnshops on Third Avenue but finding them all closed because of the Jewish holiday of Yom Kippur; and the scene where Milland has the DTs hallucination of a mouse attacked by bats.

It all adds up to a distinguished film about an unpleasant subject, that’s handled with ingenuity and true feelings for what the lost soul hero is going through. A film whose unlikable hero is a self-pitying heel, yet the filmmaker manages to show tough love to him, have something worthwhile to say and make this descent into hell somewhat entertaining. 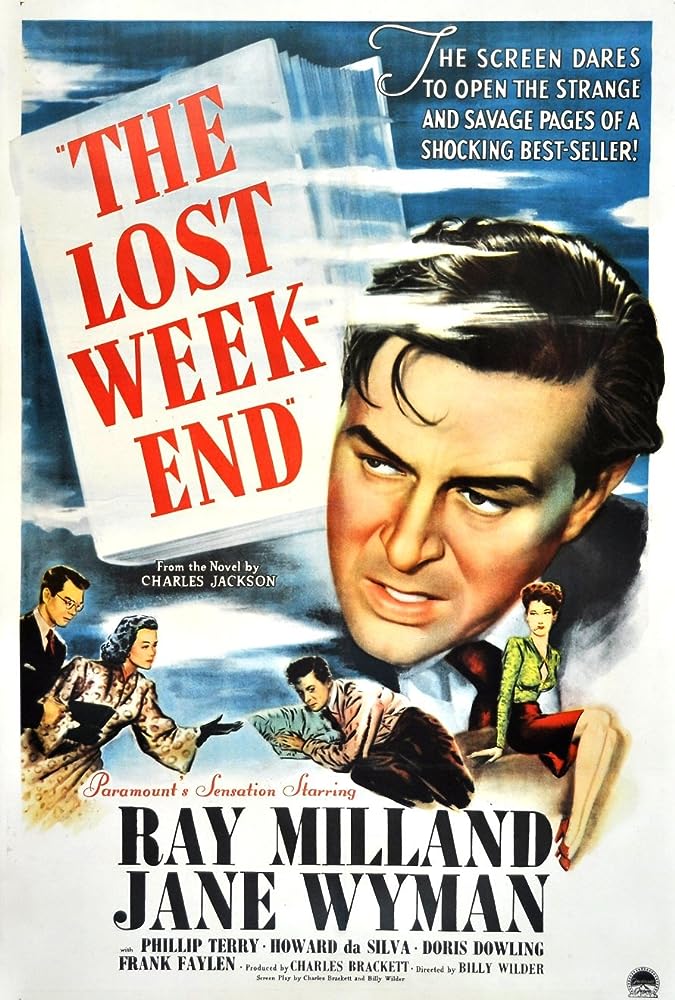