LOST ONE, THE (VERLORENE, DER)

Peter Lorre’s only crack at directing and writing results in just a wonderful personal statement film that documents an odd tragic case in Germany’s WW11 and postwar years; it’s as endearing a work as Lorre’s acting roles. Lorre was born in Hungary of Jewish parents, was raised by them in Vienna, and fled to America in 1933 when the Nazis came to power. The noted character actor was famous for playing villains ever since his role as a child murderer in Fritz Lang’s 1931 German masterpiece “M”–but that has also been a curse as it typecast him in that role throughout his career (he also played Asian detective Mr. Moto in that minor crime thriller series). Lorre became celebrated in America for teaming in villainy with Sydney Greenstreet, as their first role together in The Maltese Falcon (1941) and later in Casablanca (1943) linked them together forever in the annals of filmdom history. Humphrey Bogart starred in both those films. The German film known as Der Verlorene and in America as The Lost One, has been a masterpiece long lost but has recently been restored and shown in European festivals. Lorre returned in 1950 to a destroyed postwar Germany to film it. I saw the black-and-white thriller on a DVD release by Video Search of Miami (vsom.com). The film is loosely based on a true press report regarding the suicide death of Dr. Karl Rothe, a head scientist of a research institute during WW11.

The film opens in a displaced persons (refugees and released prisoners) camp in Germany after the WW11 armistice. Peter Lorre is Dr. Karl Neumeister a world-weary, strangely acting, chain-smoking, hard-drinking and hard-working physician in the camp. The loner doctor is confronted with his sordid past when a refugee by the name of Nowak (Karl John) shows up posing as a chemist and is assigned by the barrack’s head to assist the doctor in giving inoculations. The film goes into flashback when the doctor and his mysterious new assistant go into the canteen to get stinking drunk and talk about their coincidental meeting. We learn that Dr. Neumeister’s real name is Dr. Karl Rothe and Nowak’s is Hösch, and they knew each other beforehand as the doctor still has a pistol he took from him back then. Dr. Rothe was involved in top-secret antibiotic experiments at his Institute and Hösch was a Gestapo agent assigned to work and to act as a spy there. Colonel Winkler (Rudolph), head of the Counter Intelligence-Espionage department, comes to Rothe’s Institute and informs him that Hösch is a Gestapo agent who has gotten Inge to confess that she has been passing on his experiments for money to the Allies and also that Inge was having an affair with the Gestapo agent. Back in the boarding house where the devastated doctor lives with Inge and her kindly but overbearing mother (Hofer), an urge to strangle Inge because of her double-betrayal overcomes him. The doctor cracks and this sets off a latent psychopathic disorder to strangle the unfaithful woman he loves. After the strangulation murder it is covered up as a suicide by the Gestapo agent and his boss Colonel Winkler, as they believe they got for the State one of them on their team. But Rothe’s homicidal urges take over and he goes on a serial killing binge as he’s unable to control himself from killing other unfaithful women. Rothe feels so guilt-ridden that he wants to get caught and punished or, if not, commit suicide. But because of an urge for a smoke he would have taken his life, but instead he winds up at the house of Colonel Winkler and learns the good colonel was in on the thwarted attempt to assassinate Hitler and is meeting with his co-conspirators when Rothe sneaks into his house. This sets off an extraordinary series of events that mixes fiction with fact, and is always absorbing as Rothe is forced to go on the run and change his identity.

In this amazingly accomplished noirish and German Expressionist type of film, it continually gains strength from not backing away from its dreary background of bareness and in the dreamlike logical way it connects the three diverse villains Rothe, Hösch and Winkler in their need to go underground to hide from their pursuers. Everything about this film remained eerie and tense throughout, as the acting was properly understated. Lorre plays his intense role with a sufferer’s frightening indifference to what is happening to him. He gets to the heart of his character by utilizing simple gestures like a hand held close to his face to indicate the shame he’s feeling for his uncontrollable urges or by his habitual mutterings which indicate how closed off he has come to the world, and not by overacting as he was accused of doing in some of his other films. Also, the darkly shot scenes caught the desperate mood of the ruined country as well as zero in on the damaged psyches of the film characters. It was a film about dirty secrets revealed and by letting the viewer in on them, as it goes full circle by beginning in the dark clouds from the past and ending in a whirl of dark smoke from a train indicating the present is also just as bleak. It is truly a remarkable film coming out of the depressed German film industry of the postwar period. In the plot developed exclusively in the flashback, it shows how the research scientist is forced into political complicity with the mass murdering Nazis by their calculated actions to use him to suit their purposes even though they knew he was a murderer killing innocent Germans.

It’s a haunting film about Germany’s past, one of the best of its kind. Unfortunately, it’s a film that has been seen by too few as it has rarely gotten theater bookings in America. Even when it originally opened, it was too realistic and bleak at the time to attract a German audience who were wishing only to forget the recent past and move on. Filming this low-budget film was also quite the chore, as there were interruptions due to a leading actor becoming sick and ongoing budgetary constraints. Lorre used the break in filming to write a book about the film, that wasn’t published until 1996. But the book, I understand without having read it, clears up some loose ends in the mysterious life of Dr. Karl Rothe. 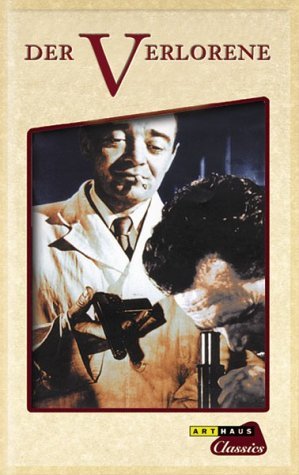