An archetypal dopey 1950s B-film made for the drive-in crowd. It presents itself as a fictional documentary exposé that realistically tells about a young Hollywood actor who is obsessed with death and his struggles to live. This masks its attempt to retell the life of James Dean, someone the protagonist looks like and shares with the same personality traits.

Johnnie Dennis (Ken Clayton) is a handsome but troubled young man who came to Hollywood from a small-town in Pennsylvania three years ago to be an actor. The brooding Johnnie is all worked up about being lonely and homesick, and he doesn’t seem to be happy that he’s on the verge of stardom with the premiere of his first film “Desperate Hours.” He studied with acting teacher Tanya Pernaud (Lilyan Chauvin), who has become more than a teacher but a best friend and advisor. She’s someone concerned with Johnnie’s death wish, reckless lifestyle of drag racing up and down Sunset Boulevard, and of picking up loose girls.

Johnnie hangs out at a coffee shop with aspiring actor Walt (Richard Gilden), a creepy guy who is jealous of Johnnie and is always verbally and physically fighting with him. Pinkie (Carol Nugent) is a hottie who is willing to do anything to get a break in showbiz, and is sort of sweet on Walter. At least, I think she is. She tells her new girlfriend, Darlene, an aspiring actress from New York, that “He’s [Walt] a phony, but a good looking phony. You can’t expect everything in a man.”

Drugstore clerk Helen Preacher (Barbara Wilson) is a sweet innocent gal who was nearly run over by Johnnie on the Strip, but he later meets her in the library, where he’s brushing up on psychology by reading a book on death, and the way he is intently reading piques her interest. They accidentally meet later that night on the street near the movie theater of his premiere, as he skips attending it. She now recognizes him as an actor and they go for a swim in the lake, with both parties clad in bathing suits (helping the censors out enormously). Afterwards Johnnie drives her home, where he meets her nice guy welder father and steals a goodnight kiss from her. When he returns later to the coffee shop, he gets into a vicious brawl with the taunting Walter and gets some facial injuries after knocking his foe unconscious.

In this talky romantic drama, Johnnie pulls out that 1950s ‘rebel without a cause’ thing in the air for many teens and has a running conversation with himself about his despair as he drives his convertible to the same lake spot he went swimming with Helen. Once there, he throws in the lake a self-portrait of himself looking depressed and gets into his car to drive away relieved that he has thrown away his dark side.

I guess from this exposé dramatization of what the real Hollywood is like for young actors, we have gotten a chance to get into the head of someone as fucked-up as Johnnie. It’s hardly shocking or that interesting, or, for that matter, as sordid as promised on the video cover. But, what the hell, for an exploitation film it wasn’t as bad as it sounds. 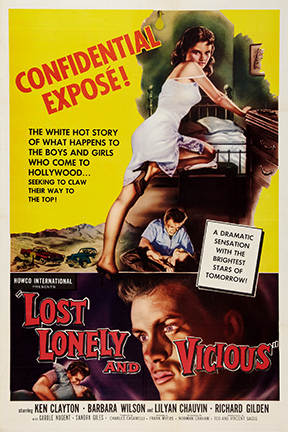