LOOKING FOR COMEDY IN THE MUSLIM WORLD

Sony chickened out of distributing Looking for Comedy in the Muslim World last year after Albert Brooks refused to change its title. Writer-director Albert Brooks (“Real Life”/”Modern Romance”/”Lost in America “) turns out a fair comedy (using dry wit), with somewhat politically-charged material that never gets too pointedly dangerous, that’s based on the idea that there are huge discrepancies between cultures. Brooks maintains that most Americans know squat about Muslims and have a lot to bone up on. In this attempt to be a commercial film with some arty pretensions, Brooks is going to India to shoot a movie (most of it filmed in New Delhi) about how to get laughs on foreign soil. It’s a somewhat funny and at times poignant post-9/11 look at the changed world and how ignorant countries are of each other despite international movies, TV and newspapers.

The film opens with Albert Brooks being interviewed by director Penny Marshall, who is looking for another Jimmy Stewart for a new version of Harvey. He’s quickly turned down for the part for being too Jewish. At home his wife shows him a letter he received from the State Department and advises him to go to Washington and see what they have in mind. The committee chairman is the former actor turned Tennessee senator who returned to acting, Fred Dalton Thompson, who asks him to spend a month in India and Pakistan finding out what makes Muslims laugh and to submit a 500-page report of his findings (it frightens him to write such a big report). He’s told that the idea came from Bush 43 and is further told: “The president has a pretty darn good sense of humor.” That might have been the funniest line in the pic. The thinking from the government is that laughter might be the best medicine for the ailing world. All expenses will be paid, but the self-deprecating comic will not receive a salary. Instead he will be awarded a Medal of Freedom, which greatly tempts his vanity. The needy actor, worried about aging and his career downturn, accepts thinking this could open up doors for him in the future.

Two bumbling cheerful State Department officials, Mark and Stuart (Jon Tenney and John Carroll Lynch), accompany him to New Delhi, and secure him a small office. Brooks then hires the sweet and bright-eyed Maya (Sheetal Sheth) as his secretary, translator and researcher. In his quest he becomes so self-absorbed with his own brand of sarcastic humor, that he refuses to understand why his kind of humor doesn’t hold up in India even though he thinks he’s listening to the ‘man in the street.’ The film’s comedy premise is contingent on the absence of comedy clubs in India and of Muslim comedians as being the reason Brooks isn’t funny. When Brooks puts on a stand-up routine in a school auditorium, outlandishly dressed in native garb, with a ventriloquist gag and an improv performance, he gets no laughs because the audience has never experienced such comic routines and can’t relate to him. His self-deprecation trip continues when Al-Jazeera wants to use him in a TV sitcom to play a Jew who is mocked in a Muslim neighborhood, but he turns it down without any visible anger at the humiliation. The news group knows him from his role in the cartoon “Finding Nemo” and not from any of his smart art films, which is what gets his goat.

His project is in danger when he can’t get a visa to Pakistan in time, but his State Deparment helpers arrange for him to cross the border blindfolded to meet with aspiring comedians (this gag backfired into one of questionable taste, as it brought back bad memories of martyred Wall Street Journal reporter Daniel Pearl). It turns out his illegal border crossing is misinterpreted by spies from India and causes a war between Pakistan and India. By this time the film got all the laughs it could muster from Brooks, playing a fictional fool’s version of himself, and fell apart in unwarranted silliness and imploded as do all Brooks’ films because of his neurotic and grating egotistical persona (the film turns into being all about Brooks’s problems and trails off from being about problems over different cultures, leaving its promising premise not fully realized). 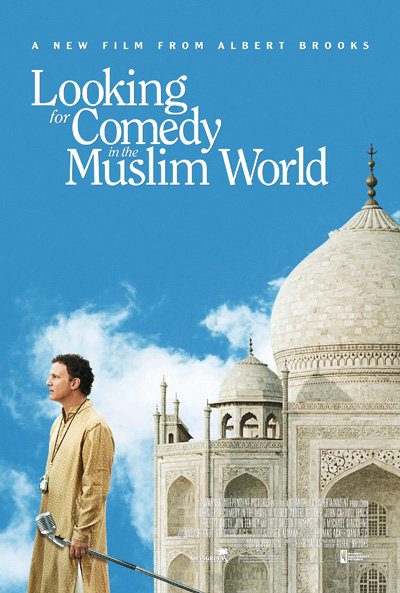