LOOK BACK IN ANGER

This dated ‘angry young man’ “kitchen-sink realism” autobiographical drama is based on the 1956 London play by English playwright John Osborne and is the debut film directorial effort by Tony Richardson (“Tom Jones”/”A Taste Of Honey”/”The Entertainer”). The play was also directed by Richardson. Richard Burton is too old and too strong a personality for the part of the whiny rebel who displays arrogance in his angry outbursts, believing he’s owed something by the world, and thereby elicits little sympathy in contrast to the stage version characterization which has the rebel as a mixed-up weakling venting because he’s looking for answers. Though a trend setting film, with snappy play dialogue, well-acted and competently crafted, its depressing tone makes it a tough watch. Much of the play’s noted class war rhetoric was toned down for the film.

The 25-year-old Jimmy Porter (Richard Burton), a college man, living in a dismal town in Northern England, is the archetypal “angry young man.” By day the working class man operates a candy stall in a street market, on Saturday nights he plays the trumpet at a jazz club. When at home Jimmy harangues his long-suffering sweet wife Alison (Mary Ure), who comes from an upper-class family whom he hates, and goes on loud rants against the world. Also living in the cramped flat is Jimmy’s close Welshman working class friend Cliff Lewis (Gary Raymond), an amiable bloke who runs the candy stall with Jimmy. The candy stall was given to Jimmy by the elderly widower cockney Mrs Tanner (Edith Evans), someone Jimmy cherishes.

Alison becomes pregnant and the doctor refuses an abortion. At the same time Alison’s best friend Helena Charles (Claire Bloom) has been invited by Alison to live in their flat while acting in a town play. Jimmy hates Helena, which is mutual, but they soon become involved romantically after the downtrodden Alison moves back with her folks at Helena’s suggestion. There are a few subplots such as Alison’s relationship with her befuddled father (Glen Byam Shaw), a retired military man, and Jimmy’s attempt to help an East Indian market vendor (S.P. Kapoor) stave off a bigoted constable (Donald Pleasence). By the film’s end nothing much is resolved, even if Alison and Jimmy get back together, as the English working class is shown to be stuck in a dead-end existence.

Osborne was so taken by Ure that he took her for his second wife in 1957, after she also played Alison in the stage version. The film did a poor box office, but helped reconfirm that Burton was a great actor after big pay but uninteresting roles in cheesy Hollywood blockbusters such as The Robe. 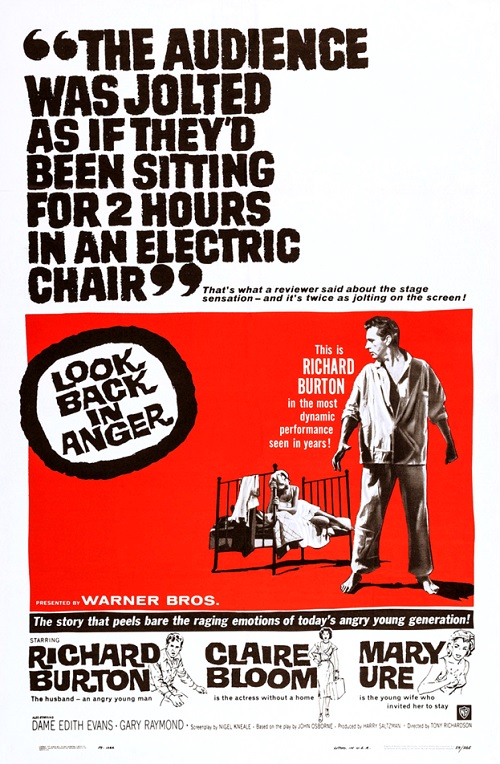