Brit writer-director Ken Hughes (“The Trials of Oscar Wilde”/”Of Human Bondage”) delivers an above average, fast-paced, no-nonsense sordid film noir, that’s shot in black-and-white. It’s based on a novel by the British crime writer Mervyn Mills. The good-guy trucker Harry Miller (Victor Mature) happily receives his military discharge from a U.S. Army Transport Company in Germany and is anxious to return to America, where his buddy has a job waiting for him in a canning factory he owns. Harry’s English wife Connie (Gene Anderson) wishes to stay in her hometown of Liverpool to reunite with her family she hasn’t seen for years and refuses to go to America. The reluctant Harry agrees to stay in Liverpool and the family relocates there with their young son Butch (Michael Wade) after her Uncle George (Wensley Pithey) gets him a low-paying job as a long-haul trucker for his company. On his first run to Glasgow, Harry believes his fellow trucker Casey (Liam Redmond) has his truck robbed when it’s only staged to look like one. Casey gets a cut from the stolen cargo from the thieves, who work for a trucking racketeer. Harry’s heroic actions in stopping the robbery draw the attention of the racketeer trucking company boss Joe Easy (Patrick Allen), who gets his thugs to steal his truck which gets him blackballed from getting another trucking job. Meanwhile Easy’s abused sexy wife, a former taxi dancer, falls for Harry and he can’t resist the sultry lady. It leads to Connie finding out about the affair and declaring she never wants to go to America. So a desperate Harry, driven to a dead-end situation, works for the racketeer to survive these hard times. He takes part in a robbery of the truck’s cargo and then faking the truck going over a cliff that results in the accidental death of Casey. Police investigate and Harry is a suspect on the run, who plans to escape to Boston with the hard-luck Lynn and her venal hubby. Hubby schemes to deliver a truckload of stolen furs to a freighter waiting in a hidden spot in a cove. The plan calls for a one-way trip for each of them to America. Also included is Lynn’s ex-con accountant brother Frank (Peter Reynolds), who works for Eas. But the plan is not carried out, as the confused and guilt-ridden Harry returns to his wife to try and straighten out what can’t be. 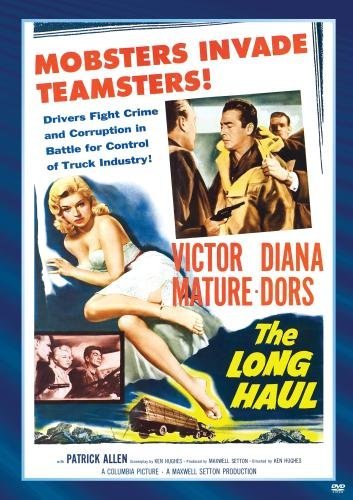 DAUGHTER OF THE DRAGON