LONDON BELONGS TO ME (aka: DULCIMER STREET)

It was released in the States as Dulcimer Street. Writer-director Sidney Gilliat (“Green for Danger”/”Notorious Gentleman”/”Waterloo Road”) helms a postwar comedy-drama about a group of ordinary residents (each an amusing eccentric) living a humdrum existence and dealing with their aspirations in a lower-middle-class London boarding house. The melodrama starts off as a “slice of life” domestic comedy then becomes a murder melodrama and concludes unconvincingly as a bizarre farce. It was co-written by J. B. Williams. In 1978, Norman Collin’s book was made into a seven-part series for Thames Television.

On Christmas Eve of 1938, the widow landlord of the boarding house at 10 Dulcimer Street, Mrs Vizzard (Joyce Carey), allows manipulative elderly dance hall coat checker Connie Coke (Ivy St. Helier) to put off payment of her back rent until after the holiday. The landlord rents out her basement room to phony medium Henry Squales (Alastair Sim), who performs a seance at her occult club. The mousey cockney Fred Josser (Wylie Watson) is given a clock at his retirement celebration by his firm after forty years of service and his crabby wife (Fay Compton) groans at his foolish contentment. His pretty young daughter Doris (Susan Shaw) attracts garage mechanic Percy Boon (Richard Attenborough) who lives upstairs with his elderly widowed mother (Gladys Henson), but she’s not interested in him. Nevertheless she goes to Connie’s dance hall with Percy just to spite her embittered negative mum who can’t stand the boy. When the joint is raided by the police, she meets Policeman Bill (Andrew Crawford), who soon becomes her boyfriend.

The innocent Percy, against his better judgment, has been talked into touching up stolen vehicles for the shady Jack Rufus (Maurice Denham) to get coin to help boost his dead social life and impress Doris, his dream girl. One night Percy steals a car and uses it to drive his ex-girlfriend Mona (Eleanor Summerfield) home, but she panics when he jumps a police checkpoint without stopping and realizes the car must be stolen. They scuffle and she accidentally falls out of the car through a faulty door and is killed.

Percy is arrested when Bill dates Doris and becomes suspicious of his movements, but his boarding house neighbors back him with money to get a lawyer. Nevertheless he’s convicted and sentenced to hang. This leads his boarding house lodgers to get a petition going under the urging of alarmist Henry (Stephen Murray), a relative of the Jossers, and they get a group to march to Whitehall demanding his reprieve.

The film is at a disadvantage because it retains the static look of a play, but the wonderful character performance of Alastair Sim gives one pause to take a chance on this oddball comedy romp. 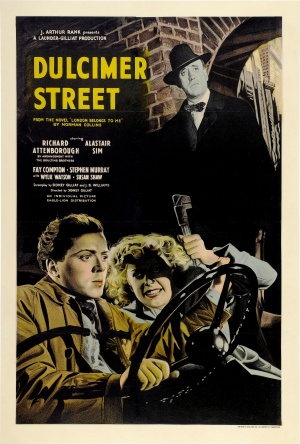