Bernardo Bertolucci creates a Buddhism flick for children. It’s adapted from an original script by Rudy Wurlitzer and co-written by Bertolucci and his regular screenwriter Mark Peploe. The film covers two stories: a contemporary tale about an elderly and dying Tibetan lama, Lama Norbu (Ying Ruocheng), believing that nine-year-old Jesse Conrad (Alex Wiesendanger) living in Seattle might be the reincarnation of his teacher and the traditional story of Siddhartha that relates to the origins of Buddhism 2,500 years ago. Though it often goes flat, it nevertheless has some captivating qualities about both contemporary American life and Tibetan Buddhism.

Architect Dean Conrad (Chris Isaak) and his math teacher wife Lisa (Bridget Fonda) are stunned to find two robed Buddhist monks sitting in their living room apartment talking with them about the possibility of their son Jesse being in another lifetime the teacher of one of the monks, Lama Norbu. Because of a series of disturbing dreams, the monks have traveled from Nepal to Seattle and the monks want to take their son back to a Bhutan monastery with them to ascertain the truth. The parents are at first skeptical but Dean has a spiritual awakening after his partner commits suicide and he is faced with bankruptcy, and permits Jesse to go with the monks. The kindly Lama Norbu gives Jesse a children’s picture-book about Siddhartha (Keanu Reeves) to prepare him for his Buddhist experience. The film then inserts its traditional Buddha story. Siddhartha is shown leading a sheltered life until he ventures out of his palace and meets beggars and others facing poverty and hunger. After this revelation that life is suffering, Siddhartha goes on his Buddha path searching for enlightenment. It is the Reeves segment that gives the movie its dazzle and splash. Less convincing is the tale about the present day and Jesse in Bhutan along with two other children candidates awaiting signs that one of them is the reincarnated Buddhist mystic.

The essays about Buddhism and children having an accepting nature that merits nourishing in the course of their growth, though compelling was sometimes too muddled an effort to clearly state the filmmaker’s purposes. As always, a Bertolucci picture is gorgeously photographed. Little Buddha is lavishly garnished in burnt-orange colors and other ravishing tints. Though the casting of the vacant looking parents didn’t do anything for me, the passive Reeves surprisingly fits in very well as an ascetic wanderer. But the film’s most dynamic casting decision is Ying Ruocheng, who was also wonderful in Bertolucci’s The Last Emperor. The film never reaches greatness, ruined by its too long length and some poor editing decisions. But it never fails to be interesting and leaves one thinking about spiritual and deeper philosophical questions, which is a lot more than most Hollywood films do whether aimed for children or adults. 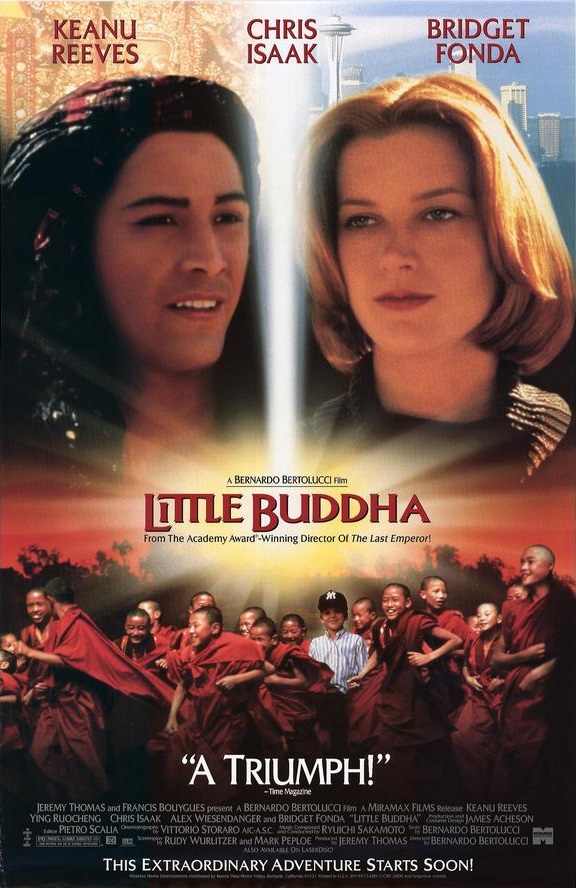