Phillip Winter (Vogler) plays a soundman who travels by car to Lisbon to work on a silent film of the director Friedrich Monroe (Bauchau). Because of car problems he arrives late and Monroe can’t be found. Phillip takes it on himself to continue working on the film, while falling in love with a sensual singer (Teresa) who is the lead singer for the group Madredeus. He then goes touring Lisbon with some of the kids working on Monroe’s film. The kids fool around with the cameras, taking pictures of everything that catches their fancy, as he starts putting together the director’s unfinished work while making himself at home in the director’s unique apartment. Winter starts cruising around Lisbon in search of sounds to match Friedrich’s abandoned images; the film features the urban portrait of a Lisbon that he believes Monroe’s film calls for.

One thing becomes apparent, Wenders has very little feel for comedy as all his efforts to evoke Buster Keaton type comedic skits fall flat. The film rambles pointlessly on. When he catches up with Bauchau their dialogue is pretentious, as if they were trying to say something heavy about images and the making of movies but are really saying very little.

What was praiseworthy was the singer, Teresa Salgueiro (herself), and the moody songs she sang. She reminded me of a Greek blues singer. The sensual Portuguese sound of a musical group called Madredeus becomes the crux and the life-force of the film.

The travelogue tour of Lisbon came off well. It’s a city that is easy to look at because of its beautiful colors and tranquil streets. It should come as no surprise to how beautifully it is filmed, since this commercial film was sponsored by the city as a way of boosting tourism. Wenders contrasts the splendid structures of the old city with the more modern Lisbon, not taking sides about which side of the city he likes better.

The great Portugese filmmaker Manoel de Oliveira makes a cameo to deliver a sermon on films, by asking: “What use is the universe?” A profound question for this lightweight travelogue to probe. This conversation seems forced, not happening with the mood of the film; nevertheless, some good ideas about the values of the older films are discussed here, the main point being that we need artists so that they can imitate God.

I just didn’t see much of a story in this somewhat diverting travelogue about Lisbon. 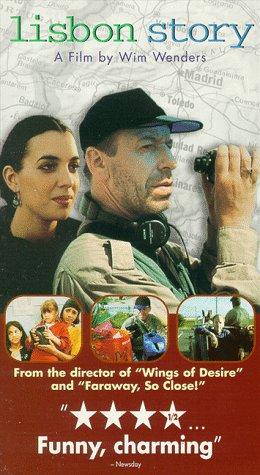