“… the chaotic lead characters are not the sorts one will usually see in a Disney film and that makes for a certain amount of unpredictability before it all returns to business as usual.”

Lilo & Stitch is produced by the same Disney team that created Mulan. Its co-directors and writers are Dean DeBlois and Chris Sanders. The animators do a terrific job as Andreas Deja tackles the Lilo character, while Alex Kuperschmidt does Stitch. It’s more raucous and looser than any non-Pixar Disney film usually is and is pretty to look at with its old fashioned hand-drawn characters and its artful use of watercolors for backgrounds, a reminder of the Japanese anime presentations. It’s a throwback to the time when cartoons dominated the screens and the characters could be funny in a nutty and irreverent way. Some might be reminded of the E.T. character, which the lead creature has a certain resemblance to. What makes this film sparkle with wonderment, is that the chaotic lead characters are not the sorts one will usually see in a Disney film and that makes for a certain amount of unpredictability before it all returns to business as usual.

On the remote planet Turo a scientist with a heavy Russian accent, Dr. Jumba (Stiers), is on trial because he has conducted an unauthorized genetic mutation experiment and has created a blue monster simply called Experiment 626 (Sanders), who is programed to destroy cities and everything else he can get his hands on and is indestructible. The scientist is jailed and 626 is sent into exile to a desert asteroid, but manages to steal a spacecraft and escape. His escape brings him to Kauai Island in Hawaii, where he crash lands his spacecraft. At the same time a sad little girl notices that and thinks it’s a falling star and makes a wish: “I need someone to be my friend,” she says. “Maybe send me an angel, the nicest angel you have.”

The Grand Councilwoman (Caldwell) in the alien planet orders the scientist and deputizes Pleakley (McDonald), a one-eyed, three-footed alien creature with expertise knowledge on terrestrial ecology and interplanetary environmental law, to follow 626 to Hawaii and bring him back for his punishment. The scientist is recruited for the job because he should know how to capture his creation without making too much of a fuss as they don’t want to send an army to earth and have to destroy the planet, especially since they want to save the mosquitoes whom they believe to be an endangered species and who need the humans to feed off. Jumba is offered release from prison time if he’s successful.

In Hawaii, on the island of Kauai, 626 is hit by a truck and mistaken for a dog as he’s brought to the dog pound. 626 miraculously recovers and is adopted by the young troubled Hawaiian girl named Lilo (Chase), who made the previous wish. Lilo mistakes him for a puppy and names him Stitch, and it turns out what they both have in common is an instinct for chaos. Lilo is an orphan under the care of her big sister Nani (Carrere), who has her hands full looking after the unruly loner with a fondness for listening to Elvis Presley records (such as “Hound Dog” and “Heartbreak Hotel”) and fighting with her peers. An odd looking mysterious social worker for child’s welfare services, the man-in-black, named Cobra Bubbles (Rhames), comes to her home to check out reports that Lilo is uncontrollable and that her sister can’t handle her, and finds that Lilo locked herself in the house and refused to open the door. Cobra threatens to remove her from the home if things don’t improve. But things get worst, as Lilo bonds with Stitch and they destroy whatever they touch. When Nani brings them both to her waitress job in a fake traditional luau tourist trap restaurant Stitch upsets a patron couple and that causes Nani to get fired. The couple happen to be the two sent by the Galactic Federation to recapture Stitch.

The film’s humor is more addressed to adults than children, as it makes remarks about the pop culture scene while it attacks those in authority with its broad physical humor. But, alas, it’s a Disney film, so Stitch who quickly learns English by the film’s end, probably, in order pay his respects in his new language to family values in the Disney tradition. Much is made about Hawaii’s notion of ohana or family, meaning “nobody gets left behind or forgotten.” 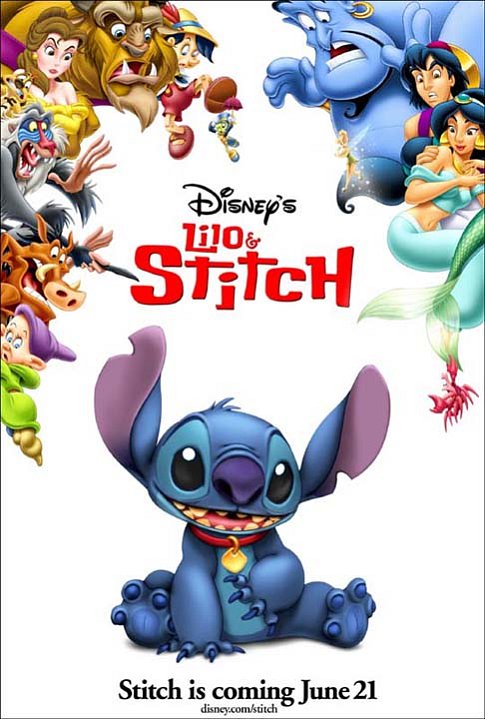