Alfonso Arau (“Picking Up The Pieces”/”A Walk in the Clouds”) directs this overlong and overcooked romantic fable that spans several generations of a traditional Mexican family (going off target on too many subplots, causing the film to lose its focus). It’s based on the best-selling novel by Laura Esquival (the wife of Alfonso Arau), who pens the not so delicious screenplay. It tells the story of forbidden love that takes place on a ranch in Mexico near the Texas border at the turn of the last century, at a time of the Mexican Revolution. It follows Babettes Feast (1987) in having its theme related to cooking as the central motif. Following in the magical realism literary genre, Like Water For Chocolate (its title derived from a Mexican recipe of making hot chocolate by boiling and re-boiling water with cocoa–thereby it refers to the heroine’s temper, kept like the water just below the boiling point) blends food, sex, politics, mysticism and history into a women’s pic about a love only consummated through the mouth-watering meals (such as quail served in a sauce of rose-petals, that gives all the diners an orgasm). The kitchen becomes a source of such alchemy, where the chef’s mood gives the food its taste (tears in the wedding cake make those who eat it want to cry). The cooking for sensuality metaphor film lets things boil over with a passion that loses its taste after boiling over once or twice too much and becomes indigestible.

Born in Mexico, in 1895, Tita (Lumi Cavazos), the youngest of three daughters of an embittered and willful widowed rancher mom Elena de la Garza (Regina Torne), is doomed by tradition to spend her life looking after her mom and not be allowed to leave the house to marry. Tita is raised by the family’s elderly earthy cook Nacha (Ada Carrasco), who not only befriends the unfortunate Tita but teaches her about the relation between food and passion. When in 1910 the 15-year-old Tita is not allowed to marry her true love Pedro Muzquiz (Marco Leonardi), mom instead allows Pedro to marry her oldest sister Rosaura (Yareli Arizmendi). Pedro devilishly marries Rosaura so he can be near Tita, despite not loving her.

Naturally Tita is heartbroken, but obeys her cruel unfeeling mother and becomes the family servant while inwardly loving Pedro in a spiritual way that transcends their separation. Since they all live in the ranch together, Tita’s repressed love gets expressed only in the exotic meals she serves.

The film follows a glossy Hollywood arc, whereby in the forty years it covers there’s rape (Tita’s middle sister Gertrudis-Claudette Maille-is carried off naked by a soldier of the Revolution and will later reappear as a famous revolutionary leader), burnings, soap opera romantics and a Cinderella-like fairy-tale appeal that seemed to have played into the mass audience’s sensibilities. In the States, it became one of the highest grossing foreign language films of its era. 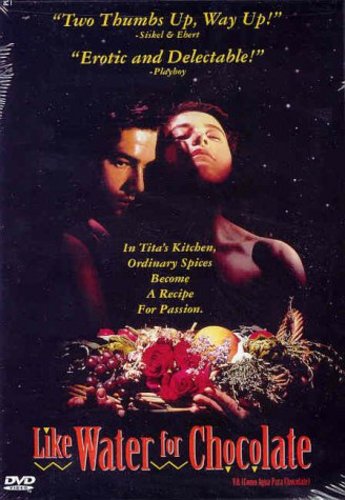