A unique and disturbing rambling documentary recording the painful last two months in the life of the great and neglected American Hollywood maverick film director Nicholas Ray (August 7, 1911 – June 16, 1979), who was withering away from lung cancer and died at age 67. It’s a fitting heartfelt tribute to Ray, a pic that should be cherished by film buffs, in particular, for its zeal for artistic cinema, for showing Ray’s spirited quest to try and reinvent cinema, and its honesty in depicting the characters involved in the filming. Ray’s final film was released posthumously, after it was completed by Wim Wenders. It was co-directed with Ray’s much younger German filmmaker friend Wim Wenders, who at the time was in production for making his $10 million budgeted Hammett in San Francisco. Wenders was stymied as how to film it, but flew to NYC on April 8, 1979 to stay with Ray in his Manhattan loft in SoHo. Ray lived there with his wife Susan, who was forty years younger.

The vague film was at first to be about a fictional painter going back to China to find a cure for his disease, but when that idea seemed too ambitious for the emaciated Ray to undertake, it turned into a film about Ray’s dying with grace while trying to redeem himself as the true artistic filmmaker Hollywood rejected because he was supposedly too difficult to work with. The experimental film, shot on a shoestring budget, by an idol-worshiping crew, was a film that had no rules about making a film and was improvised throughout, changing as the situation warranted. The idea was to catch movie magic by sort of rubbing two sticks together, thus the title of Lightning over Water.

In April, Ray still has enough energy to give an engaging lecture at Vassar about his films, converse with Wenders about his fears of making Hammett and for Ray’s film crew to be filmed interacting by another crew–making it a ‘film within a film.’ There are clips shown from Ray’s masterpiece The Lusty Men (1952), that starred Robert Mitchum, in arguably his finest performance. It’s a story about risking everything to ride the dangerous rodeo circuit, something Ray relates to his own real-life struggles to do things his own way no matter the consequences. There are also clips shown from his idiosyncratic weird but most engaging college film We Can’t Go Home Again (1976), which was shot as an experimental film about student life during the Vietnam War while he taught film at the upstate NY Harpur College in the early 1970s. 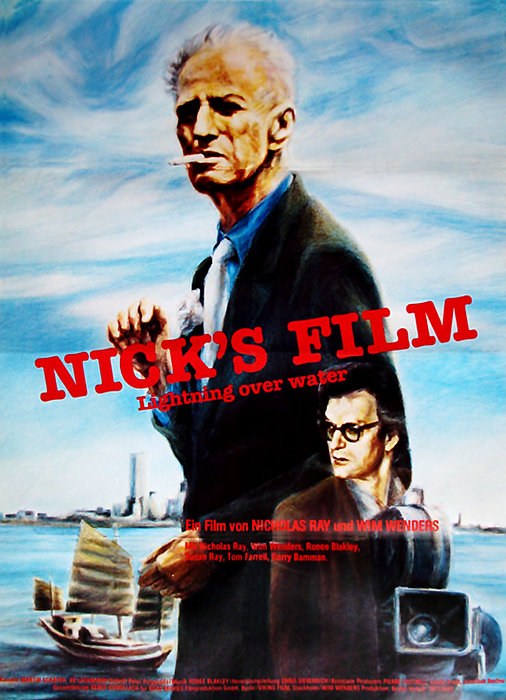