Twyla Tharp’s Dance Troupe (consisting of thirteen dancers) took their successful Broadway show and executed it with great elan for television, using an assortment of spectacular visual techniques such as computer graphics. David Byrne, the leadman of the Talking Heads, composed the score.

The wheel was named after Saint Catherine of Alexandria from the early 4th century. She was believed to have been killed in this fashion during the rule of the Roman Emperor Maxentius. According to my google research the Catherine Wheel was a product of the middle ages, whereas the victim’s limbs were crushed with blunt objects. Their still-living remains were subjected to the wheel. This meant the mangled arms and legs were threaded through the spokes. The wheel was then hoisted into the air using a long pole. Hungry vultures and crows picked at the body. Death came slowly. The victim looked like “A sort of huge screaming puppet writhing in rivulets of blood, a puppet with four tentacles, like a sea monster, of raw, slimy and shapeless flesh mixed up with splinters of smashed bones.” This was one of the most popular spectacles of the time. The masses, both common and noble, watched in fascination, cheering at a good wheeling. A woman vic brought even greater enthusiasm.

Twyla Tharp is a renown pioneer in modern dance. In this avant-garde production the dancers act out the martyrdom of the 4th century St. Catherine, who lived an austere life dedicating herself to merging with God and finding perfection. The lead dancer in the troupe, Sara, tries to emulate the saint in reaching perfection in dance, an impossible task, that means attaining the supernatural. A computer figure of Catherine is used for Sara to compare her progress. It also follows her squabbling family who keep the dancer back. The dance/theater production makes its way toward a brilliant firework-like finale. The Golden Section burned away the characters petty squabbles and worldly concerns in a blazing orbital path, creating an elegy to the spirit.

It makes for a fabulous watch; immensely entertaining. It’s filled with exciting dancing and a pulsating score. 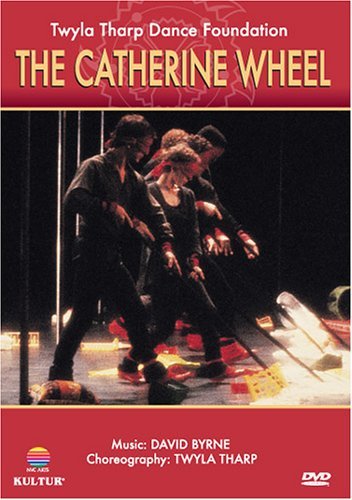