A low-budget indie movie by director-writer David Lawler (“Vortex”), who seems to have a little of Steven Spielberg and much more of Charles Manson in him (at least they were all born in Cincinnati). His current film is based loosely on the short story Ligeia by Edgar Allan Poe; a story I immensely enjoyed and is worth a read. It was a love story with a bizarre twist, as the author was fascinated with the theme of the doppleganger. Poe’s unnamed narrator is wed to a beautiful woman named Ligeia, with whom he is passionately in love with and that their two souls seemed almost like one. Ligeia becomes terminally ill and dies, but on her deathbed stuns him by passionately declaring so much love for him. In his loneliness the narrator takes a new bride, Rowena. However, he shortly comes to detest his new wife, merely because he still loves Ligeia. Rowena too falls ill, and as he stays by her bedside he discovers to his horror that the shrouded body when uncovered is not Rowena at all, but Ligeia. According to Poe, Death could always be suppressed by the power of the human soul.

hat is set in modern Los Angeles. Any connection with Poe is a bit of a stretch, but can be found by the discerning viewer who cares to fully exercise his imagination. Lawler uses Poe’s ‘death theme’ to explore the new sexual extremes in the modern marriage. Kieran is married to his second wife Rowena–his first wife Ligeia died, but he can’t get his beautiful former wife out of his mind and as a result ignores his current wife’s sexual appetites. When an old lover Rowena hasn’t seen for five years, Bobby, unexpectedly calls, she invites him over for casual sex. But he had a sex-change operation and is now a she. The frustrated Rowena, nevertheless, jumps into the sack with her sensitive caller.

The best line in the film comes from Bobby answering Rowena’s question. Rowena: “What do you miss the most about being a man? Bobby retorts: “Being taken seriously.” Meanwhile Kieran is aroused by Kelly, who is married to Bill–a swinging couple they hang out with, who are into a partner-swapping relationship. The possessive Kelly swings with Kieran, while Rowena swings with Bill and bites part of his ear off. Kelly has a demonic streak in her and gets Kieran to murder Bill when he returns from the emergency room with a repaired ear, as she finds her hubby to be a tiresome asshole. The possessed woman then tries to convince Kieran to kill his wife so she can have him all to herself.

To understand where Lawler was going with this flick, one would have to understand how much Kieran was possessed by the soul of his first wife and how much he still loved her. It’s not clearly shown in the dramatization, which therefore makes all the murderous sequences seem ridiculous (aside from being amateurishly acted). The only sure way of knowing this strong inner bond existed would have been to read the short story. But despite the pointless narrative and disappointing cinematic production values, Lawler shows some talent in taking the film in new directions. He, probably, needs to determine if he wants to go the total wacky route or leave some room to be taken seriously. In this film he took the former approach, thereby reaching only for some kinky sex scenes and a twisted sicko narrative–not enough to sate my appetite for Poe. 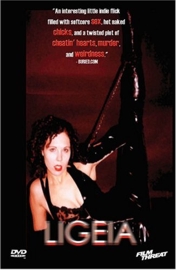