Noted Mexican director Arturo Ripstein (“Deep Crimson”/”White Lies”) presents a hard-hitting film noir on Mexico’s police corruption and its faulty judicial system. It is acclaimed by Somos as one of the top 20 Mexican films of all time. Its theme revolves around the belief that ‘once a thief, always a thief.’ Ripstein shows that even if a criminal reforms and gets a lucky break, it’s still difficult to break from those old criminal ways and associations. Its dark theme states that ‘fate or some mysterious force or bad karma can put the finger on you once you get off to a wrong start and no matter what you do you can’t escape from the past.’

“Tarzan” Lira (Pedro Armendáriz Jr.) has reformed after a life of petty crime (stealing wallets and pimping) and a long jail sentence in Marias Island, where he was nearly fatally stabbed by the chief of the prison, Pantoja, when it was discovered that he was betraying his kindness by screwing his wife. After his prison release and rehabilitation under a kindly mentor, Tarzan was given a break by a bank boss, Jesus Romero, and hired as a money collector. He has since settled down with a wife and a young daughter, and now dresses sharply in business suits and makes the best of the little wages he receives.

But all this is interrupted when his old nemesis, the chief of police, Burro Prieto stops him on the street and takes him to a remote spot and blackmails him into becoming part of his crime ring. Prieto’s partner gives Tarzan a beating, which reminds him of the beatings he used to get in the police station. Tarzan is ordered to pay 600 pesos a day for protection and to be robbed by them of the bank’s money he has in his briefcase that he collected from different companies.

Tarzan has a panic attack, believing the police department and all law officials are so corrupt that he can’t report the robbery to them without being sent back to jail. When he goes to tell his boss, he can’t be found at home or at his pigeon breeding club or at the restaurant he usually frequents. Tarzan muses that if he can’t let him know about the robbery today, tomorrow will be too late. This climactic day is also the day Mexico plays a championship soccer game with the World Champion German team. Again, the obvious symbolism is one of David vs. Goliath. The once cocky mugger of his youth is now seen as a worried man approaching middle-age, who is so distraught that things have gone wrong that he pick-pockets a tourist’s wallet outside the soccer match. The film ends with a frozen sullen look on Tarzan’s face, indicating he has been given a life sentence behind bars.

Ripstein’s film is rich with feelings for the oppressed and is emotionally draining. It can be filtered through those 1940s American film noirs, especially Ulmer’s 1945 Detour, but emerging with a Latino sense of desperation as the protagonist reflects on his life through a series of flashbacks and wonders how everything went so wrong. Pedro Armendáriz Jr. is the perfect ill-fated protagonist, whose expressions mirror his inner joys when he’s mounting a woman and utter despair when he’s being bullied by the ruthless police chief. 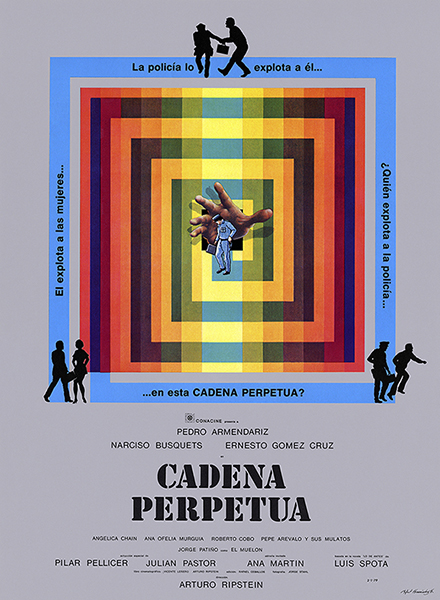