“This was a humorless film about tiresome characters who kept getting more annoying the more serious they became.”

A superficial sitcom type of romantic comedy that has the earth shattering message that one better live for the moment because one never knows when they might die. It is directed with insouciance by Stephen Herek (The Mighty Ducks/Mr. Holland’s Opus), and is based on the story by John Scott Shepherd that he coscripts with Dana Stevens.

In this dull, feel-good, cliché-driven story, Lanie Kerigan (Jolie) is an overly ambitious careerist Seattle television reporter with a mop of fashionable platinum-blonde hair, a silver Mercedes, puffy red lips and a dolled-up glamor gal look as her trademark. Lanie is currently engaged to a dumb jock, the professional baseball star of the Mariners Cal Cooper. But she really is in a love-hate relationship with scruffy cameraman Pete (Burns), who also pretends he hates her but really loves her. This is a tiresome romantic story about how the battling lovers are finally brought together by Jolie’s career move to New York.

The gimmick that springs the plot is when a homeless man, known as Prophet Jack (Shalhoub), predicts during an on-air interview with Lanie that Seattle will beat Denver by six points, it will hail tomorrow, and in a week she will die and not get the network job she is seeking. This gives Lanie a scare and a chance to find out who she really is, as she reevaluates her life.

Well, the viewer doesn’t have to be a prophet to figure out everything that will happen to Lanie. All one has to be, is a viewer of such sitcom films over the years and I guarantee you can guess what will happen. I will not spoil your ‘fun’ at taking a stab at prophecy by telling you if she lived, as that was as exciting as trying to guess the similarity between Lanie and an Altoids mint.

The picture’s most dramatic moment is when a drunken and bent out of shape Lanie encourages the striking transit workers to sing a lively chorus of the Rolling Stones’ “Satisfaction” during her interview. That scene was so weak and embarrassing that even this bad film should have realized that.

The most poignant film moment, supposedly, is when Lanie interviews in New York for the big network show Debra (Channing), a legendary TV reporter and gets her to answer intimate unscripted questions she never has before. But now with the choice between career success in New York or romance in Seattle, or maybe just dying as the prediction claims, the movie resolutely answers all these questions in the safest and most ordinary way it can.

This was a humorless film about tiresome characters who kept getting more annoying the more serious they became. It had little in common with reality and had no emotional impact since Jolie’s character was underdeveloped and she did nothing to give it life, and the Burns character was a bore. 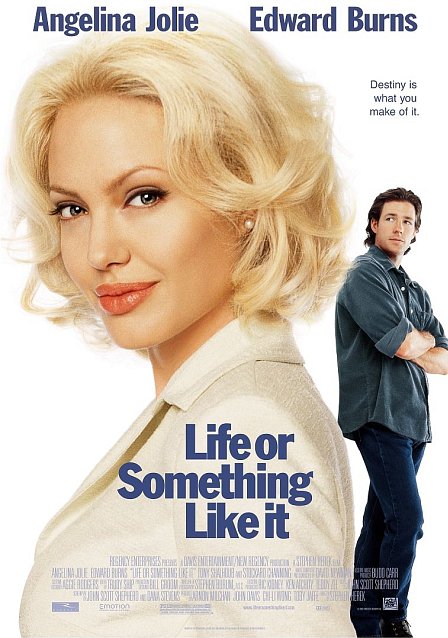