Writer-director Mike Leigh (“High Hopes”/”Secrets and Lies”/”Riff-Raff”) in his third pic directs this offbeat suburban English comedy about ordinary lower-middle-class folks involved in minor mishaps, with the director’s wife at the time, Alison Steadman, stealing the show as Wendy the nurturing suburban housewife survivor. Leigh uses the improvisational method of filmmaking (shooting without a screenplay) to great effect.

The nuclear family of Enfield, in the suburbs of London, has Wendy, the matriarch, holding down two jobs while the good-natured dreamer hubby, Andy (Jim Broadbent), who works in a job he detests in the food preparation industry, is busying himself with trying to start his own business–a mobile snack-bar–that was suggested by his drunken pal Patsy (Stephen Rea). But an accident (tripping over a spoon and breaking a leg) puts a dent in that plan and leaves him on crutches. The ambitious so-called normal couple have twin 21-year-old daughters, who have vastly different personalities. The optimistic tomboy Natalie (Claire Skinner) who works as a plumber’s assistant and the unemployed, sharp-tongued, self-loathing, anorexic Nicola (Jane Horrocks), the sour puss of the family, a rebel against conventionality who tries to dampen the family’s spirits with her bad vibes. Nicola’s only pleasure is in having casual sex with the use of a jar of peanut butter, and has a boyfriend (David Thewlis) who is trying to make this implausible relationship work.

A friend of the family is the lonely, abrasive and repellent Aubrey (Timothy Spall), who opens a pretentiously chic gourmet French restaurant, the ‘Regret Rien,’ and ropes in Wendy to be his waitress. Aubrey’s elaborate menu includes a prune quiche and duck in chocolate sauce.

Mom holds the family together and tries to get each to survive their mundane everyday situations, in this appealing slice-of-life working-class melodrama. The result is an amusingly quirky take on family life, accomplished through a variety of vignettes and through Leigh’s sympathetic ear for his harried regular folk characters. 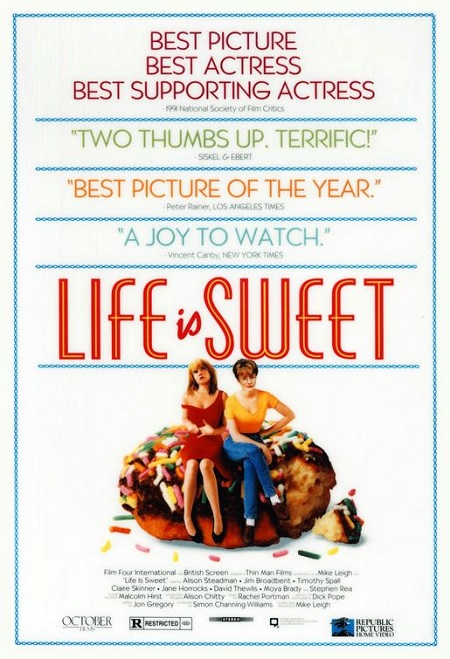