LIFE AND DEATH OF COLONEL BLIMP, THE

The writer-director-producer team of Michael Powell and Emeric Pressburger (“The Red Shoes”) base this stiff-upper-lip satire about how out of touch the military was in fighting a modern war against a devious and brutal enemy. It’s also a love story (in truth it’s a propaganda film that’s very difficult to label since it attacks the politicians and Blimpish outdated soldiers as useless fossils instead of singing the praises of such leaders as is the custom in such films). It’s inspired by David Low’s political cartoons for The Evening Standard that featured the blustery “old war dog” Colonel Blimp. It might be the best film to ever come out of England. This masterpiece was scorned in England when it was first released because it created a controversy about the war effort and many feared its challenging patriotic message was too damning. The country was emerged in war and was in no mood to have a film depicting its military leaders as archaic and not willing to do anything to win even if it was unethical. Prime Minister Winston Churchill was so upset that he banned the film from overseas release, fearing the Brits would be looked upon as too weak for having such idealistic buffoonish soldiers as the Colonel Blimp characterization by Livesey leading their army. He was wrong, of course. To the contrary, the Livesey character comes across as a sympathetic and high-minded person of principle who only made his country look good by his stand against killing civilians and not writing off all Germans as barbarians. The film, though, erred by not showing any of them as thugs, which caused the Powell and Pressburger team to be called pro-German in some quarters; this perceived attitude caused the War Office and the Ministry of Information to refuse to cooperate with the film–meaning the filmmakers had to steal the military equipment used in the pic. It didn’t come to the States until May of 1945, and only in an edited form (about 20 minutes lopped off). But time has been good to this film and the critical arguments from back then against the Powell and Pressburger team no longer hold up to inspection; it’s easier to take in its critical views without being so emotionally involved in a crucial war.

It follows the exploits of a British Army officer named Clive Wynne Candy (Roger Livesey) through flashback after an army war exercise and Candy, now an Old Guard stuffed-shirt, who is sweet but a gasbag general grown stout, with a beefy red face and with a walrus mustache (he looks exactly like Low’s Colonel Blimp). The general reprimands the wise guy young lieutenant (James McKechnie), the boyfriend of his driver Angela (Deborah Kerr, at 21 in her first major starring role portraying three different characters), who cheats by launching an attack before the agreed upon start time of midnight. The young pup reasons that the enemy won’t follow the rules and lords it over the general for getting the best of him in a Turkish bath six hours before the war game was to start.

This brings about a flashback of Candy’s military career that traces a forty year time span covering his return from the Boer War in 1902 as a feisty young officer and the beginning of his longtime relationship with German officer Theo Kretschmar-Schuldorff (Anton Walbrook), his First World War experiences, his marriage to war nurse Barbara (Deborah Kerr), who looks a lot like Edith, and his return to the military after retirement as a stodgy conservative general for the home guard during the Second World War.

The opening flashback has Candy as a rakish young officer going without military permission to Berlin to repudiate the German spy and propagandist Kaunitz’s (David Ward) who has slandered the British military’s South African campaign in 1902 with false stories of atrocities they committed. While at a beer garden with the attractive English governess Miss Edith Hunter (Deborah Kerr), Candy’s slurs against the spy lead to a duel of honor as Kaunitz chooses the young army officer Theo to fight his duel. Both men end up scarred with Candy having a scarred lip, the reason for his prominent walrus mustache. While in the hospital, Candy never tells Edith he loves her (not realizing he loves her until it’s too late and will spend the rest of his life pining for her) and she falls for Theo and they marry. It nevertheless leads to the friendship between the two men, as we follow their ups and downs for the next forty years.

When the film was finally restored after numerous cuts back to its 163 minute length in 1988 and shown in the States, critics called it England’s answer to Citizen Kane–which to me is a stretch, though both were certainly first-rate biopics. 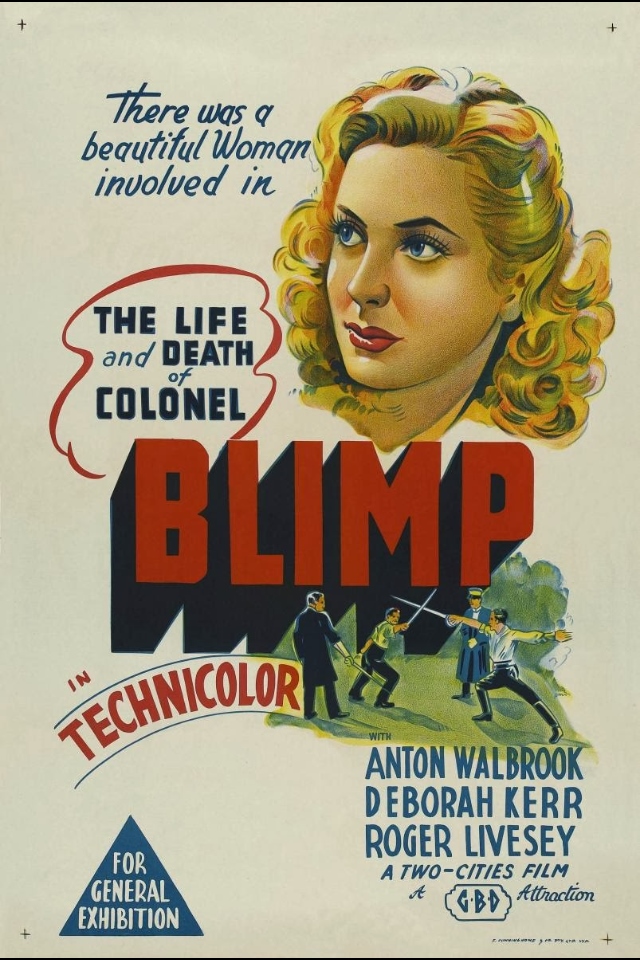