“Watching it was a very cold experience.”

A whimsical cartoon-like Belgian slapstick comedy, in the style of a Buster Keaton silent and an amiable Jacques Tati venture. It’s about the middle-class and the emptiness of their everyday life, but has no teeth in its satire and remains annoyingly cutesy. The mostly wordless picture relishes in mucho physical comedy, sight gags, pantomime and pratfalls.

Fiona (Fiona Gordon), a lanky and rubbery woman of plain looks, is the manager of a suburban fast-food restaurant who accidentally locks herself in the large walk-in freezer at closing time and remains there overnight. The morning shift of fast-food workers discover her curled up inside a cardboard box half-frozen but unharmed. At home, neither her robotic husband (Dominique Abel) nor her robotic two small children (Ophelie Rousseau, Robin Goupil) noticed she was absent. This leads the irate lady to understand that she’s not the happy camper she thought and needs a change of lifestyle. Now obsessed with icebergs and polar bears, on an impulsive whim she purposely lets herself get locked in the freezer of a refrigerated delivery truck and escapes her dull but comfortable life to the distant North Atlantic shore. Fiona is in a search for self-awareness, which translates as a place that has real icebergs—no more freezers for this weirdo. At the shore, Fiona hitches a ride on the sailboat Le Titanique, captained by a deaf-mute misanthropic sailor named René (Philippe Martz). He’s someone who stopped talking twenty years ago on the day his sister played with matches and did in his entire family. Dreaming that she’s fallen in love with the love-starved sailor, Fiona suddenly finds her bland husband, still dressed in a white shirt and tie, has followed her and is determined to persuade her to return home and end her dream.

In an awkward twisty ending, we are told it’s not really a story about Fiona and her pursuit of an iceberg, but a tale told by a coast guard officer, Inuit woman named Nattikuttuk (Lucy Tulugarjuk), and it’s about how she met her husband during a rescue mission.

Watching it was a very cold experience. 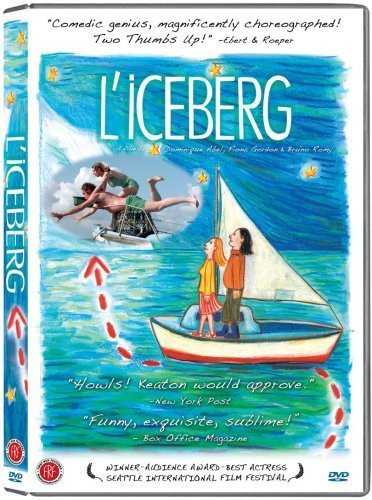