Mikhail Kalatozov (“The Cranes Are Flying”/”I Am Cuba”/”The Red Tent”) passionately directs this black-and-white shot classic socialist realism film, that is enhanced by erotic melodramatics and powerful stylish nature images. It’s based on a story by Valeri Osipov, and the intense screenplay is penned by Osipov, Grigori Koltunov, and playwright Viktor Rozov. It features the stunningly forceful photography of the director’s regular collaborator Sergei Urusevsky. The emphasis is on the fragility of mankind in its struggles to survive and conquer the forces of nature that inflict such events as unruly waters, freezing conditions, gusting winds, and raging forest fires. It’s second theme is that mankind has an obligation to seek progress to make the world a better place to live in.

It follows four dedicated Russians, a guide and 3 geologists, on their third expedition to find diamonds in the wilderness of the Central Siberian Plateau, an area called Taiga. Their leader is Kostya Sabinin (Innokenti Smoktunovsky), who is writing a passionate diary type of letter to his wife Vera (Galina Kozhakina) back in Moscow that is never sent and the source for the film’s title. The group’s guide is the bachelor Sergei (Yevgeni Urbansky), and the other two geologists are the lovebirds Andrei (Vasili Livanov) and the pretty Tanya (Tatyana Samojlova). Tension arises when Sergei’s crush on Tanya comes out in the open and how in a confrontation between the men Sergei expresses wonder how someone as lovely as Tanya can be in love with such a spineless creature as the bookish Andrei. The first half of the film covers the hardships of the rugged expedition, where the scientists fight their negative thoughts as they explore to no avail the vast area in the summer and fight for survival in the harsh landscape.

The film’s second half is in the autumn, when they find the diamond field and name it Octahedron. But in trying to get back to their base camp, they get trapped in a wilderness forest fire and after radioing their base camp about their discovery lose all communication. When they start dying off one-by-one and the search by plane can’t locate them, their main concern becomes the noble one to make sure they bring out the map so their fellow Soviets would benefit from their discovery. In the end, there’s one frozen survivor rescued by helicopter and the map is found on the survivor in the hopes the political leaders can now carry out the dream of the Communist country to prosper and advance civilization.

The flaws are that the storyline is slight, all the characters are undeveloped and the selfless heroic deeds seemed required film-making according to Communist doctrine to pass the censors and not inspired storytelling. 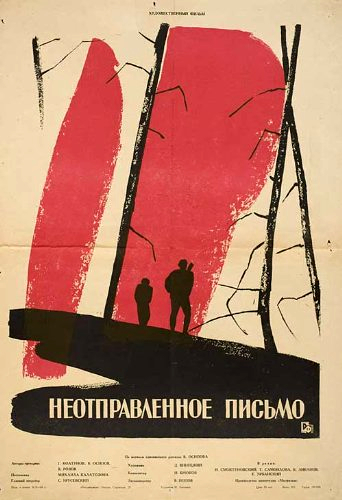