“Robert Bresson’s first full-length feature is an auspicious minimalist one.”

Robert Bresson’s first full-length feature is an auspicious minimalist one, but much more talky and conventional than his later films. There was a prior 1934 short comedy called Affaires publiques. “Les Anges” was filmed in France under Nazi occupation in 1943. It’s set in the real-life Dominican convent of the Sisters of Béthany. Bresson shows the nuns who live in seclusion interact amongst themselves and engage in prison rehabilitation work among the prisoners. The themes covered will become typical Bresson ones that are expanded and used throughout his career such as fate being determined by whom one meets and how one deals with sin and salvation.

Anne-Marie Lamaury (Renée Faure) is a young middle-class woman who gives up her secure comfortable life to join the convent to help others. The novice gets involved with working with prisoners and feels something special with Thérèse (Jany Holt), an unrepentant young prisoner who was sentenced to two years for theft even though she’s innocent. Thérèse can’t forgive her male lover for letting her do the time for the crime he committed. After two weeks of seeing the nun, Thérèse is released and the first thing she does is buy a revolver from a gunsmith and then at point-blank range get her revenge on her criminal lover. The murderess hides out from the police by joining as a novice the same convent as Anne-Marie. The delighted Anne-Marie offers obsessive devotion to the reluctant Thérèse who only craves silence, as this relationship proves to be deadly to the selfless novice helper. Religious life is seen as comparable to prison life, while the Order can be compared to the Resistance as they do not cooperate with the authorities by failing to turn over to them the wanted murderess. What Bresson brilliantly does is sublimely bring together the seemingly opposite worlds of the religious and the secular as possibly working in their different ways to achieve the same ends. It ends by showing that freedom comes in this world through an enlightened death, while for the living they can only expect to be taken in handcuffs back to prison. 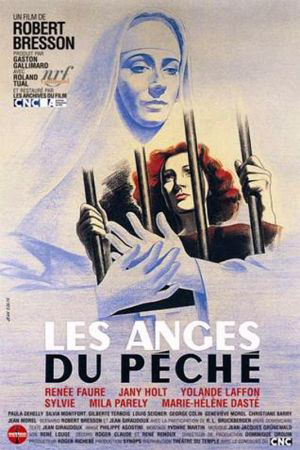