A brilliant lighthearted musical comedy that is one of the early films to be shot in sound. It’s directed with panache by René Clair. For its time it was a sophisticated and accomplished technical film, as it featured asynchronous sound and other inventive goodies. It is inspired by the play of Georges Berr & Marcel Guillemaud. A Dutch lottery ticket gets lost and a hunt for it pursues. It’s “A Night At The Opera” with better music and almost as much comedy. The dialogue is half-sung and half-spoken, yet it all comes together as one real funny work and with a deeper meaning than one might at first think.

The film is set in the Paris of 1930. In the opening scene, there’s a celebration taking place at night (so we already know everything turns out well). When two gentleman enter the apartment through the skylight roof door, they are told the celebration is for the lottery winner. His name is Michel (René Lefèvre) and he was a struggling artist and overnight he became a millionaire by winning the lottery. The story goes into flashback, as the events of what happened earlier in the hectic day are told.

Michel is engaged to his attractive neighbor Beatrice (Annabella), who works as a ballet dancer. She gets jealous when she catches him smooching with his model Vanda (Vanda Gréville). Michel’s best friend is Prosper (Jean-Louis Allibert), also a struggling artist. He, too, loves Beatrice and attempts to gain from Michel’s reckless behavior. Meanwhile many creditors come to see Michel about the money he owes them, and this stops him from romancing Vanda. The butcher, grocer, landlord, and milk maid demand their money, as they threaten to impound his furniture and throw him out on the street if he doesn’t pay.

The police enter Michel’s apartment building and begin searching for a con artist called Grandpa Tulipe (Ollivier). But he eludes them by hiding out in Beatrice’s, where the police are fooled and mistake him for someone else when they see him playing the piano and dressed in the raggedy jacket Michel gave her to do some tailoring. Grandpa Tulipe borrows the jacket as a disguise to make his escape from the police who are still guarding the building, and before he leaves he promises to do her a favor in return.

Michel is ecstatic when he learns he won the lottery and then is despondent when he learns the jacket where he kept the ticket is missing. His creditors think he’s to become a millionaire by tomorrow, so they become best friends and extend him more credit. The grocer brings over an ample supply of refreshments and champagne for the celebration.

Michel and Prosper keep it to themselves that the ticket is missing. But Prosper uses this situation to trick his friend into splitting the ticket with him, if he can recover it. What he doesn’t tell Michel, is that Beatrice suddenly remembered the name of the man she gave the jacket to and told him.

The film is filled with madcap comedy, a few mix ups, and numerous sight gags. The jacket is transferred from Tulipe and then sold to a pompous opera tenor (Siroesco) from America, who is currently appearing in Boheme and has purchased it for that role. The trail of the jacket goes from Tulipe’s hideout to finally the opera house, but there was also a stopover in the jail. Michel is mistaken for Tulipe and arrested for stealing the opera singer’s watch. He only gets out when not Prosper but his new friends, his creditors, vouch for him. The comic highlight of the film takes place in the opera house, while the opera performance is going on there are a number of concerned parties trying to pull the jacket away from each other onstage. It looked like a Rugby scrum.

Clair’s perfect timing for comedy and his delicate touch, make this immensely enjoyable work one of the great classics. It could even be a masterpiece, I won’t argue. Its funny ironical last comment, which comes by way of a song, is that you’re not any worse off for being a millionaire. 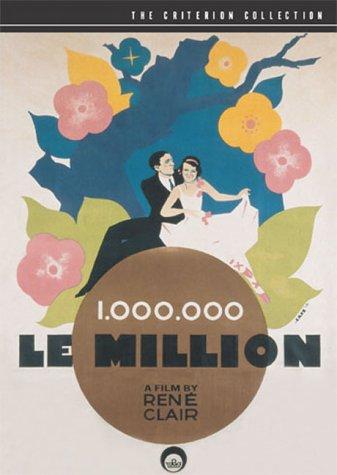