Carl Theodor Dreyer’s second feature film is an ambitious study of evil through the ages, but the great Danish filmmaker is years away from his masterpieces of The Passion of Joan of Arc, Vampyr, Day of Wrath, Ordet and Gertrud. The inexperienced filmmaker was influenced by D.W. Griffith’s 1916 Intolerance and aimed to map out the path of the Devil using Griffith’s innovative filming style as a guide. He added on his realistic approach to the subject matter, as he believed realism to be the most essential part of any film.

It’s based on the novel Satans Sorger by Marie Corelli. Edgar Høyer is the co-writer with Dreyer.

Dreyer tells the following four stories about the workings of evil: The Devil who turns up as a Pharisee in 30 A.D. during the Crucifixion of Christ; the role of the Grand Inquisitor in the Spanish Inquisition of the 16th century; the Devil turning an ordinary citizen into an evil doer during the French Revotion in 1793, where the imprisonment of Queen Marie Antoinette is followed until she’s led to her execution; and the satanic part played by a defrocked red monk named Ivan in the occupied Finnish town of Hirola during the Russo-Finnish war of 1918.

Dreyer’s thoughtfully derived unorthodox premise about Satan being a conflicted person who wrestles with his weaknesses, goes something like this: there’s temptation people face daily from the Devil and for every soul who yields, 100 years will be added to his time on earth. However, a 1000 years will be reduced from his judgment if a soul resists.

Though overlong, underdeveloped and filled with too much propaganda to make much of an impact, yet there are some stupendous visual moments thanks to the stirring photography of George Schnéevoigt. Otherwise, this is one of the great filmmakers’s lesser films. Nevertheless, it was Dreyer’s breakthrough film giving him status in the international community. 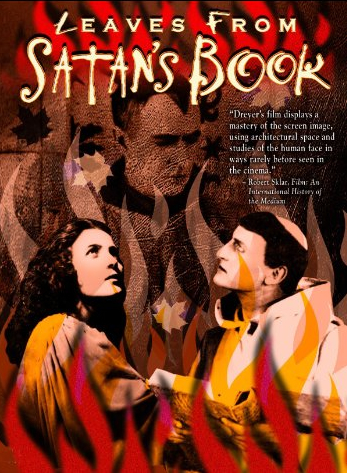