Terence Malick’s debut as a filmmaker is a smashing success as he creates a groundbreaking seminal folk tale about aimless youths. It’s set in the late 1950s in a small town in South Dakota. The lyrical understated road movie became a cult classic–mixing together murder, banality, pop culture, love and romance, and alienation in a rich milk shake of ideas–picking up on the James Dean brand of rebellion without a cause. It’s a loose dramatization of the Starkweather-Fugate Midwestern killing spree of the late 1950’s.

Kit Carruthers (Martin Sheen) is the 25-year-old South Dakota garbage collector with a striking resemblance to James Dean, who is attracted to the redheaded 15-year-old Holly Sargis (Sissy Spacek). She is spotted by him practicing her baton-twirling on the immaculate lawn in front of her house. Though Kit is from the other side of the tracks, she’s attracted to him and the two become a steady item to the disapproval of her overbearing sign-painter father (Warren Oates). The single parent dad kills her pet dog as punishment for her disobeying his orders not to see Kit. Soon Kit is fired from his job and with no workforce skills, no prospects in sight and no ambitions, he plans to leave South Dakota with Holly in tow. Told by Holly’s dad to buzz off when caught in his house packing his daughter’s bags, Kit shoots the man dead before he can go to the authorities to stop them from running away together. The unsophisticated Holly, an avid reader of fan and True Romance magazines, goes along with the trigger-happy Kit. In an artless matter of fact voiceover, used throughout the film, she states in her nasal Midwest accent that rather than face loneliness it’s better to spend time with the one I love. Kit then sets the house on fire and takes Holly to live in the wilderness of the Great Plains with him, on-the-run from the authorities.

After Kit kills three bounty hunters who locate his tree-house hideout in the woods, the two go on a meaningless killing spree across the Dakota Badlands following in the lore of such famous criminals as Bonnie and Clyde. After about eight murders, the literate but dim-witted Holly tells her lover boy while in the badlands of Montana “You’re crazy.” Soon after she tires of running and surrenders to police. Kit will also soon surrender after a car chase. When asked by the lawmen “Why did you do it? The always polite youngster replies: “I always wanted to be a criminal.”

Malick doesn’t romanticize the runaways or judge them, but just tells their story as is and allows the viewer room to fill in all the missing pieces. That it works so well could be credited to the brilliant performances of Spacek and Sheen.

The beauty of the film is that it reveals only a simple plot that hides behind a complex layered body of the characters’ psychological motivations. Though these motivations are not explicit in the story, they leave the viewer with much to ponder about as for the reason for all this violence. The two misfits find joy in becoming national celebrities and seem so detached from reality, that in their simplicity and lack of motivation seem likable despite the horrors of their deeds. What’s meaningful to Kit is that his new status elevates him in society to some kind of folk hero, someone who never gave a thought about his life or his death. He’s a product of his materialistic times, where television and movies colored his actions. His actions, though never explained, tell much more than if they were attempted to be explained. Malick caught something about America’s suburbia and its maladjusted youth that is disturbing and very real. 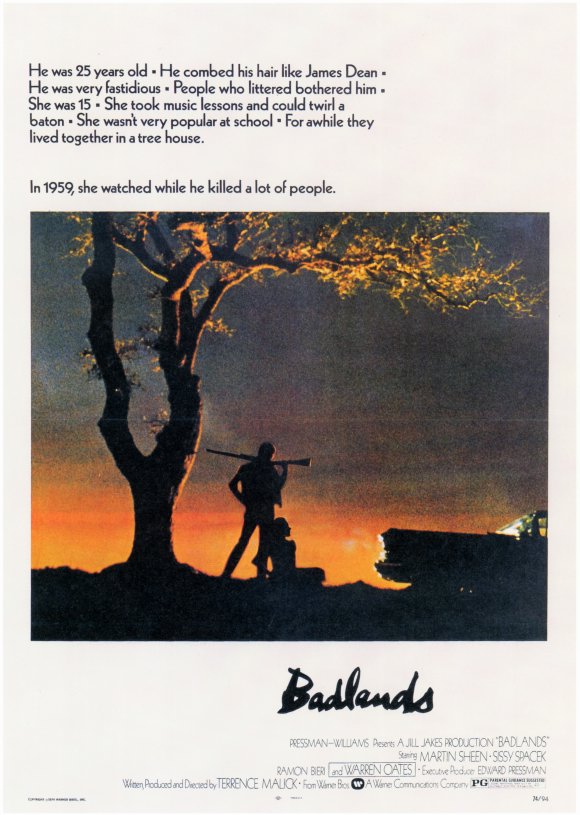