John P. McCarthy(“Raiders of the Border”/”The Cisco Kid Returns”/”Lawless Border”) effectively directs this routine action-packed B-western. It’s based on the novel by William Colt MacDonald, and the screenplay is by Robert Emmett Tansey.

Drifter cowboys, with a herd to sell, Tuscon Smith (Guinn ‘Big Boy’ Williams) and Stoney Martin (Al St. John), come to the rescue of an elderly rancher named Hayden (Lafe McKee), who is being chased on a buckboard, while on the trail, by a gang of outlaws led by Toral (Sherry Tansey). Hayden’s rancher riding partner is killed in the ambush. The grateful Hayden and his pretty daughter Joan (Molly O’Day) gladly buy the cattle from Tuscon and then hire him for protection, after it’s explained that the once peaceful valley is now lawless, as Hayden’s neighbor ranchers are killed after refusing to sell at a low price their ranches while Hayden is also threatened if he doesn’t sell to the land-grabber crooked real-estate lawyer Gordon Rontell(Ted Adams).

Tuscon repels all the gunmen Rontell hires to kill him, even a top gun from Mexico (Martin Garralaga). In the end, Tuscon frees the geologist (Broderick O’Farrell), working for the English ranch owner Sir Henry Sheffield, who was kidnapped by Rontel and forced to sign over power of attorney to him after reporting that oil has been discovered in the valley.

What the sloppily made B-film failed to do was adequately explain what is ‘the law of .45’s’ or clear-up the muddled kidnapping of the geologist so it made sense. 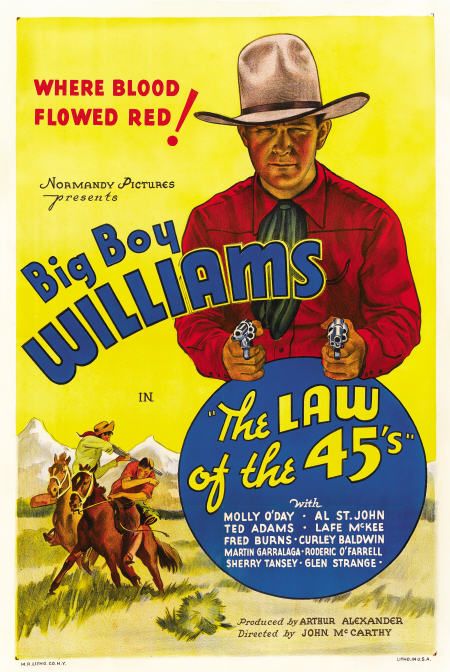