LA WITHOUT A MAP

“The knives are never sharp enough to do justice to a subject that’s so often skewered and merits a more daring treatment in its social satire.”

Finnish filmmaker Mika Kaurismäki (“Highway Society”/”Sound of Brazil”/”Sonic Mirror”) tries his hand at spoofing Tinseltown as an outsider. The culture clash story is based on the autobiographical book “Los Angeles Without a Map” by Richard Rayner, who cowrites the screenplay with Kaurismäki. The knives are never sharp enough to do justice to a subject that’s so often skewered and merits a more daring treatment in its social satire.

Thefilm opens in the sleepy town of Bradford in Northern England, where pretty American tourist Barbara (Vinessa Shaw) gets young Scottish-born undertaker Richard (David Tennant) aroused at a burial and they meet on the cute. Impulsively Richard leaves his girlfriend and dull life to unexpectedly follow Barbara to LA. The blonde beauty is an aspiring actress working as a waitress in an upscale Japanese restaurant. Before you know it Richard is on Barbara’s tail, but is jealous of the attention she gets from sleazy photographer Michael (Joe Dallesandro) and obnoxious womanizer director Patterson (Cameron Bancroft), someone she leads on to get a part.

The overlong film follows Richard’s attempts to be a screenwriter and Barbara’s attempt to break into films. Richard’s misadventures include dealing with greedy agents and other unsavory Hollywood hustler types. On another impulse Richard and Barbara wed in a roadside chapel in Nevada despite just meeting.

Though it never rocked and no real romantic sparks could be detected between the lead lovers and the visuals weren’t that interesting, it was nevertheless amiable and goofy enough to be bearable–just not that funny (an overload of self-deprecating humor grew tiresome) or perceptive or memorable. One didn’t need a Hollywood map to get around in this film, though the pic is liberally sprinkled with in-jokes, cameos and references to classic films (perhaps something film buffs could get excited about). 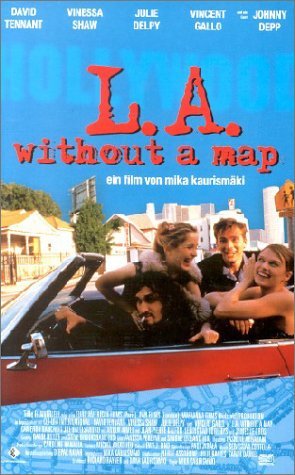