The superior first film version of W.R. Burnett’s novel Saint Johnson was filmed by Edward L. Cahn as Law and Order in 1932. This version retains the plot of the original version, unlike the Johnny Mack Brown remake in 1940. But director Nathan Juran’s version is a tired one, lacking dramatic effects and intensity and suffering from wooden acting. Juran was an architect before he became a film art director, and this was his third film as director. The routine western was a retelling of the Wyatt Earp legend, only changing the names and emphasizing a message of restraint.

The film is set in the Arizona of 1882. Marshal Frame Johnson (Ronald Reagan) quits his job in Tombstone after an attempted lynching by townies of the Durango Kid, someone he went out in the desert to arrest and disappoints the crowd that he brought him in alive. Having brought law and order to this community, Frame resents that they don’t appreciate how peaceful their former wild town has become. Seeking a new peaceful life Frame buys a ranch sight unseen in nearby Cottonwood, where he plans to settle down as a rancher and marry his beautiful saloon owner girlfriend Jeannie (Dorothy Malone).

The former marshal arriving in the new town with his best pal Denver (Chubby Johnson), Tombstone’s mortician, and brothers Lute (Alex Nicol), his deputy in Tomstone, and the troubled youngest one Jimmy (Russell Johnson), as they plan to spruce up the place and make it fit for Frame’s future wife.

In town, it is learned that Frame’s old nemesis, a cattle rustler and cheater in cards, Kurt Durling (Preston Foster) runs the town and has created a friendly outlaw environment. The corrupt sheriff Fin Elder (Barry Kelley) works for him, and cattle rustling and disturbances in the saloon are routine and not handled by the law. Judge Williams representing the law abiding citizens wants Frame to take the job of marshal, but he refuses even after a young kid, Johnny Benton, is bullied unmercifully by Durling’s young brother Bart and the sheriff doesn’t stop it. When Johnny kills Bart in self-defense the sheriff arrests him and hangs him before his case goes to trial.

Lute becomes marshal and is soon goaded into an unfair gunfight, whereby Kurt’s other brother Frank (Weaver) kills him. This flushes Frame out and he takes over as marshal, and forces an unpopular gun ordinance where no guns are allowed in town. Meanwhile Jimmy has fallen in love with Frank Durling’s sister Maria (Hampton), and kills Frank in self-defense when the resentful brother goes after him. Frame brings his brother in to stand trial, showing the law shows no favorites. But Kurt arranges for Jimmy to escape, hoping this will get Frame fired.

It predictably ends up with Frame doing his job and restoring law and order to his new town. Ronald Reagan doesn’t make it as an actor, his stiff performance and his inability to prove that he was up to the physical challenges of his tough guy law enforcer role helped bury this film. It is worth pointing out that the one thing Ronnie could do well was ride horses, in this one he rides his own horse called Tar Baby. 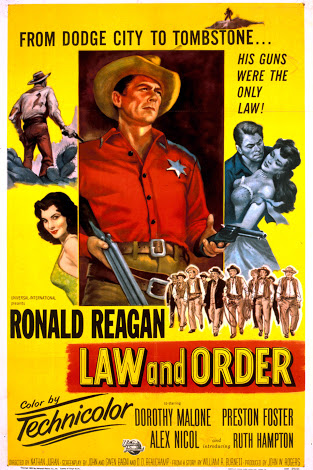