“Cotillard’s lip-synching of her character singing didn’t do it for me.”

An overlong, tedious, unaffecting and disordered narrative hangs gloomily over this impressionistic biopic of the French icon pop singer Edith Piaf (Marion Cotillard), arguably France’s best singer of the last century. She is depicted as the ill-fated poor soul suffering from alcoholism, drug addiction and a volatile personality, who passed away due to cancer at the early age of 47 in 1963.

It’s directed and co-written (along with Isabelle Sobelman) by Olivier Dahan (“Vie promise, La”) in a haphazard and joyless way, making questionable decisions of what to include and omit. For some reason it doesn’t include Piaf’s heroic role with the French Resistance during the Nazi occupation of France during WWII. It relies solely on Cotillard’s ambitious hammy performance to carry the bleak pic, who portrays her as someone so ridiculously trapped in her own skin she seemed to be always suffocating from a bad case of misery. It gets bogged down confusingly veering back and forth in a non-linear way between Edith’s horrible childhood as a waif in the Belleville district of Paris and her later years when the famous diminutive performer was frail and in poor health. It depicts a nightmarish childhood that has Edith deserted by her wayward street singing impoverished mom and placed by her in a brothel when she was five; when dad returns from WWI service he leaves her in the brothel for a time, where she grows up in granny’s whore house and at one point goes temporarily blind; and then when recovered sings on the streets for spare change. This is contrasted with an unsettling adult life that includes hanging out with criminal elements and having the affair of her life with the elusive boxer named Marcel Cerdan (Jean-Pierre Martins). It was through her magical voice that she escaped her destitute younger years, as nightclub impresario, Louis Leplee (Gerard Depardieu), discovered her singing in the street and gave her a job in his famous Gerty’s nightclub.

Keying in on the “Little Sparrow” and her vulnerabilities rather than on her strengths, the downtrodden film piles it on by showing a series of hardships that seemed to follow her around throughout her life. Edith’s best friend, Momone (Sylvie Testud), is given a better part and is more convincing in her role as a real person, than is the scene stealing but artificial performance by Cotillard.

I had a tough time connecting with Piaf in this film; Cotillard’s lip-synching of her character singing didn’t do it for me, even though I always admired her as a person and enjoyed hearing her sing. Dahan makes this into a depressing story that seems to be only about her great suffering and not about her great art, even though it’s supposedly an arty film. It shoots for heavy melodrama and misses the mark of what made Piaf so popular and respected throughout the world, especially in France. Nevertheless we hear at least three of her more famous tunes “La Vie en Rose,” “Milord” and “Non, Je Ne Regrette Rien,” which might be enough to satisfy the songbird’s diehard fans and those less discerning viewers. 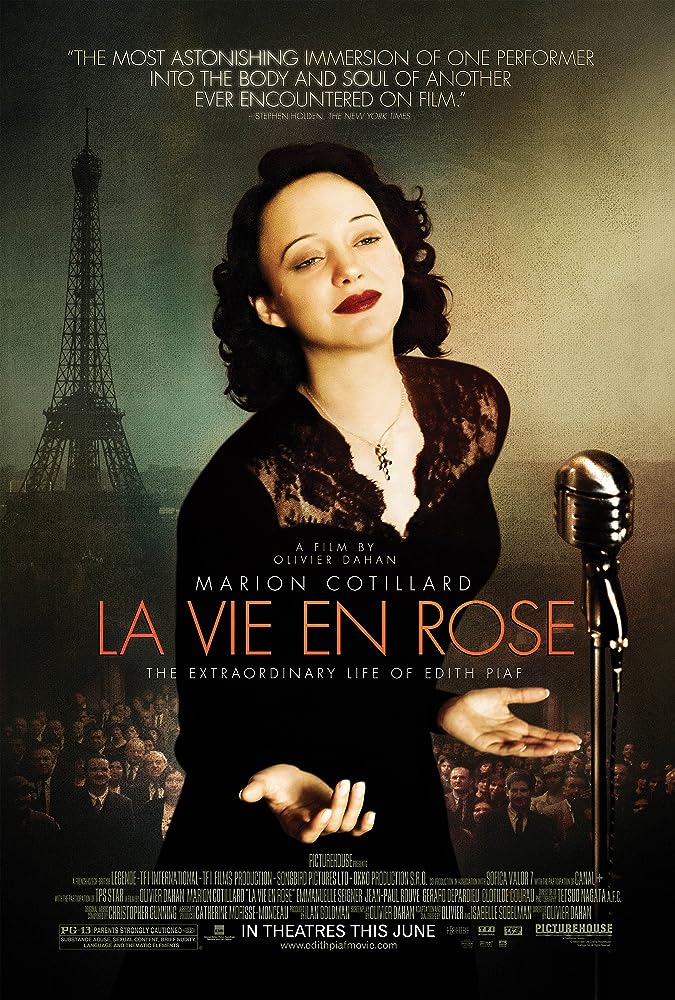