“Late Marriage is an in-your-face family drama and black comedy that is filled with raw emotions conveying despair and love.”

Director and writer Dover Kosashvili, an emigre from Soviet Georgia in 1966, has done himself proud with his confidently made auspicious first-feature film, a winner of nine Israeli Academy Awards. “Late Marriage” is a gripping and powerful unconventional social drama and romantic comedy set in modern Tel Aviv, within a community of Jewish immigrants from the former Soviet republic of Georgia. There’s the presence of the stereotypical overbearing Jewish mom, Lili, who is played by the director’s mother, Lili Koshashvili. But somehow or other she seems fresh and not a cartoon character. She looms as large as a shadowy tyrant that her son can’t shake — as she offers him a crushing possessive love that she believes with all her heart is best for him. Zaza (Lior Ashkenazi) is her precious, handsome, articulate, oldest 31-year-old son and doctoral student studying philosophy. He lives off his middle-class parent’s money, as they spoil him rotten by fully supporting him with a car, his father’s credit card, setting him up with an apartment across the street from them, and supplying his place with furnishings, electrical gadgets and modern appliances. He has been secretly seeing an older woman recently and that upsets them because it’s a sexual relationship without their approval and knowledge. His seemingly well-mannered but rigid father, Yasha (Moni Moshonov), has spoken to him to break it off. He has disappointed both mom and his father and even his extended family, as they are disappointed that he’s not married to a nice virgin, younger Jewish girl at what they consider his late age. His parents, with his mom taking charge, have set him up with over a hundred different prospects to no avail. They are traditionalists who believe in “thinking with the head and not the heart.” They usually accompany him to the girl’s house on a date where they meet the parents to see if they can get along with them, while the two eligibles get together privately in another room to see if they can communicate with each other and are compatible.

“Late Marriage” is an in-your-face family drama and black comedy that is filled with raw emotions conveying despair and love. It’s about parents who think they know what’s best for their son and force him into all sorts of embarrassing situations, as they play with his head and make him choose between love and a secure marriage according to tradition.

The film opens with a sharply comical reenactment of the traditionalist’s dating game, as Zaza’ family anxiously descends on the home of Ilana (Aya Steinovits Laor), a bitchy, sullen, 17-year-old knockout and wannabe fashion designer, who has been considered as a prospective bride. When the two retreat into her bedroom for their private meeting his mom has already superstitiously thrown a foreskin (used here as a lucky piece, which has been blessed by a rabbi) for a good marriage to emerge, under the prospective bride’s bed. Even though the two have a physical attraction for each other there is no meeting of the minds. After she shows him her portfolio of dress designs that are tasteless and fit for a slut, she shuts off all hopes for this relationship continuing by telling the intellectually minded Zaza that she wants to marry a rich man. They soon fall on the bed and casually neck for a while until he feels her younger sister under the bed spying and grows weary of how cold Ilana actually is. They meet with the parents again, but have nothing to say about how the meeting went.

After driving his parents home Zaza rushes away to meet his dark-eyed sweetheart, a 34-year-old sexy Moroccan divorcée, Judith (Ronit Elkabetz), whom he is regularly balling but only after her daughter goes to sleep. Judith has a cute 6-year-old daughter named Madona (Kugman), whom Zaza has never met because Judith wants to punish him for not being strong enough to marry her against his parent’s wishes. Their sex is playful, truthful, spontaneous, affectionate and full of the passion those have who really care for each other, as they screw most of the night. When he awakens in the morning, Madona has been lying between them. It’s one of filmdom’s longest and most amazingly well-done amorous scenes. He has found love, but it’s nearly an impossible one. Judith doesn’t know what to do to snare him, as her love for him is unbearable. Yet she knows he can’t break his mother’s heart. His only promise to her is a futile one, “once I have my doctorate I’ll introduce you to my mother.”

The director has set up how agonizing this double life that the irresolute Zaza is leading, which comes to a head as his upset parents, his blustery uncle (Chen) and his fuming aunt, stalk him in the parking lot of Judith’s apartment complex. When Zaza brings her groceries and plans to stay for the night, they all burst in on the couple and take over the place in one of the all-time humiliating movie scenes. They scare the little girl with their violent talk and repeatedly call Judith a whore, and take the starch out of their already overwhelmed son as they force him to never see her again or else they won’t leave. These emigres take it seriously that their child shouldn’t marry an older divorced woman, and especially someone with someone else’s child. It’s their old country tradition, and it is what makes them happy that counts more than his happiness. Yet if he married her, they would have reluctantly accepted it. But does he have enough balls to do that?

All the family men have left a loved one for the more convenient marriage to their present spouse not expecting love in a marriage, while the women have accepted their arranged marriages in the name of tradition. The bittersweet ending has built up a suspense as to what Zaza’s decision will be, as Zaza marries his beautiful woman — but is it the one he chooses or the one that’s chosen for him to make his parent’s happy?

The acting was superb from the entire cast. The film’s only fault was that it was more theatrical than cinema friendly. But it’s easy to overlook that when the results are so damning and some of the scenes remain unforgettable. “Late Marriage” is one of those films about a familiar meddlesome Jewish mother, but the pleasant surprise is in how much more there is to this story than at first thought and how even the stereotyped mother defies being pigeon-holed. 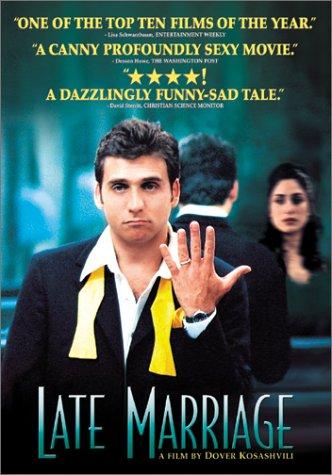