The title refers to a time span of over a year in 44-year-old writer/director Olivier Assayas’s subtle film about mortality, a follow-up to his well-received art-house hit “Irma Vep.” Summer is the season for the beginning and end of this talky and intense moody drama about relationships and pain and death and choices one makes. Its plotless story is instead built on character study and the small observations made about each character’s actions (they seem to always be eating, smoking, screwing, or arguing). The film is broken up by titled chapters that are periodically presented as the screen turns black and what follows is a vignette showing the daily life of the central figures plus an update on their mental and physical well-being. The story revolves around how a group of friends, who are mostly in their 30s, conduct their Parisian lives following the mysterious illness and later surprising death of the middle-aged writer Adrien Willer (François Cluzet). It’s shot on Super-16 film with a hand-held camera, which makes the film seem more personal and natural.

Adrien is a respected intellectual writer who has not sold out to the establishment, but in his long career his serious books have not sold well. Through his unnamed illness his friends act out their own dramas as a reaction, as they shower him with love and affection but never really understand him fully. The main focus of the film is Gabriel (Mathieu Amalric), who is Adrian’s talented but undistinguished close friend. He is a jumpy, indecisive, immature thirtysomething who never had a regular job and is given to acts of self-destruction. His relationship with the stable and friendly Jenny (Jeanne Balibar) has ended, and they are now trying to sell their shared apartment. She astutely mentions that they might have had their differences from time to time, but they got along well together as she unsuccessfully tries to win him back. She also notes that since they are alone, they both are scratching for money. But the self-absorbed writer has started a very physical relationship with the sexy free spirit Anne (Virginie Ledoyen, from “The Beach“), a tempestuous clothing designer, who is hot-tempered, not intellectual, and psychologically troubled. She craves for a more abusive relationship, the kind that she’s had with others, as she prefers that to having respect. Undecided about where this romance is going, Gabriel chooses not to live with her but have her whenever he wishes. It’s also evident that he has a complex reaction to Adrien’s illness, as he seems to be jealous of him and at the same time admires him greatly. Gabriel is troubled by his inferiority complex, as he is always in Adrien’s shadow and secretly resents himself for that. Adrien’s death effects him in the most radical way, as he feels he no longer needs the older author’s tacit approval for the decisions he makes. He has become an editor for a middling publishing house, where he does hack work such as ghostwriting a biography for a politician. While becoming more accustomed to his first regular job, he coincidentally announces his love for Anne at the same time he openly shows his resentment toward Adrien. He tells off some young staffers at his publication house who praise Adrien’s posthumous book, “You die and you’re a genius.” He then cruelly adds that Adrien’s latest book which has spurred some good sales and reviews, one that was edited by Jenny and Jeremy with real affection, was too myopic and that the author’s earlier books which he helped edit are better; but, the author’s best books died with him.

Adrien does not let on to the others how really sick he is. The others besides Jenny and Gabriel include Adrien’s friend and editor Jeremy (Alex Descas), his longtime publisher (Malartre), Gabriel’s dullish family-oriented brother Thomas (Elmosnino) and his pushy middle-class wife Maryelle (Nathalie Richard). Outside this circle there’s a 16-year-old girl named Vera (Mia Hansen-Love), who makes Adrien feel young again. She lives with her folks and has to remain secretive about dating such an older man, while Adrien seems to derive satisfaction to know she has to go home early in the evening and she dates him with great difficulty. Vera is not included in Adrien’s circle, in fact they don’t even know about her until after his death. Also outside the circle is Adrien’s bitter former wife Lucie (Khanjian), who chooses to live in Toulouse and pretend she doesn’t care about Adrien anymore.

Assayas puts a shiny gloss on those who choose to live loose lives, where even at their late age they are uncertain of their career choices and fall in and out of love without knowing why. Nothing profound comes of all this, but everything seems to be in perpetual motion and the effect is sort of like being on a merry-go-round. You know where you are going, but the more you see — the happier and dizzier you get. Its simplicity made things seem bouncy and laid the foundation for fleshing out the characters. The fine ensemble cast perform in an orderly unison and everything they do seems easily accomplished and appropriate, with no wasted motions or false energy drained by big dramatic moments. Under Assayas’s sensitive and honest direction, even the characters you thought were shits also show their good sides. 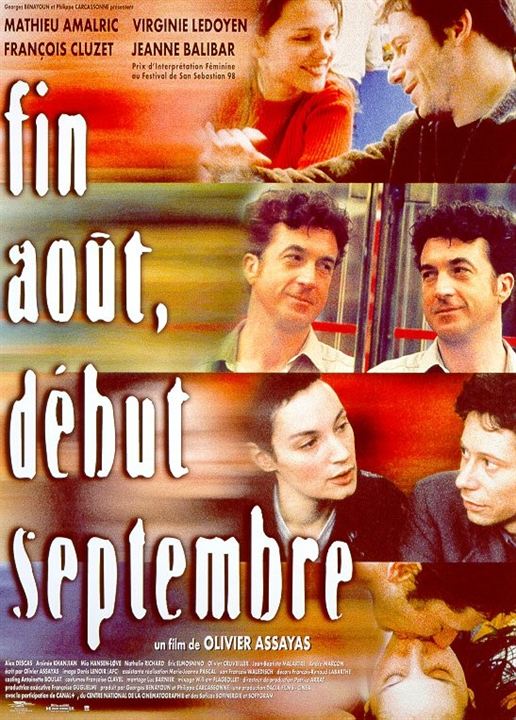