A team of eight diverse types are manning an outpost in the dead of winter in Northern Alaska for North Industries, a remote station that’s ominously built atop an Indian burial ground. They’re oil scouts, hoping to bring in rigs to get started in building a pipeline in that pristine and uncivilized part of the world. The crew is headed by the gruff Ed Pollack (Ron Perlman), the loyal company man. Returning to the station after being gone a month, Ed finds his sexy squeeze Abby (Connie Britton), the loyal company gal, has switched bed partners and is now keeping warm his rival, the newly hired respected environmental research scientist James Hoffman (James LeGros). The big oil company, as a political maneuver to get public support for the controversial project, hired Hoffman to make sure the public knows the company does things by the book and thereby calm down the environmentalist about the dangers of this project.

Other crew members include a laconic mechanic named Motor (Kevin Corrigan); a nerdy scientist named Elliot (Jamie Harrold); an outdoorsman youth who is the son of Ed’s friend, Maxwell (Zach Gilford); a friendly simplistic cook, Dawn (Joanne Shenandoah); and a mystery man who stares out into space as if communing with nature, Lee (Pato Hoffmann).

WhenMaxwell is found naked and frozen dead in the snow, an alarmed Hoffman feels something strange is going on and even if he doesn’t know what that is, he still wants to cancel the project. But he’s opposed by Ed, who talks rubbish about the project must go on no matter what because the public needs the oil. Hoffman’s on-site investigation shows a melting permafrost and a possible seepage of “sour gas.” This is something that has been dormant for over ten thousand years, and might be explained by global warming. Things keep getting worse by the minute, as some in the crew start seeing dark visions of earth-spirit monsters and start acting weird. As the crew refuses to heed Hoffman’s warning to flee the area, they finally find themselves trapped in their remote outpost with no radio contact and no way to go home again.

The disturbing pic asks us to believe that maybe the Native Americans are right when they say an evil spirit has come over the land because of man’s greed and his willingness to rape the land without concern for the environment. It’s a pro-environmental apocalyptic shocker that works as a thinking man’s ghost story pic, with enough scares and intense dramatics to get over as a warning to those who don’t take heed of the film’s message to not despoil the environment without facing deadly consequences to pay for such folly. 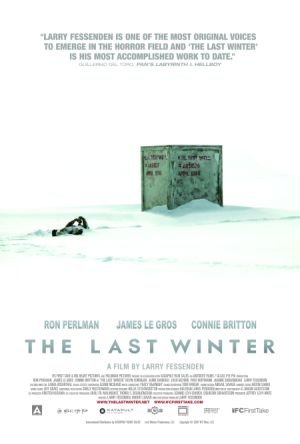