“When I say this Western was routine, I mean it was really routine.“

The Last Outpost was a big box-office success for Paramount. It was Ronald Reagan’s first starring role in a Western, and one where he rode his own ranch horse Tarbaby against the advice of the film’s horse experts who wrongly thought that the rugged Arizona location would be too difficult for the horse. The film’s producers William Pine and William C. Thomas were noted for their B-movies throughout the forties and fifties, as here they shoot for the big-time with an A feature. It’s a stale yarn of two brothers on opposite sides of the Civil War, who in the climactic scene team up to stave off an Apache attack on civilians. Its motto could be “Where there’s smoke, there’s Indians.”

Set in 1862 in Texas along the Santa Fe Trail, a Confederate raiding party is stealing gold shipments and wagon supplies. Ronald Reagan stars as the daring but chivalrous Confederate Captain Vance Britton, who leads this band of a hundred guerrillas on a series of sabotage expeditions. The Union Army sends Vance’s colonel brother, Jeb Britton (Bruce Bennett), to relieve the fort’s Union major and put an end to these raids. Sam McCloud runs a trading outpost and is disappointed with the Union army’s weak response and lack of troop strength, and writes to those he’s connected with in Washington to use the Apaches to attack the Rebs. Even though Jeb rejects this proposal because he fears the savages will attack any soldier or settler and it’s not worth the risk, Washington sends Major Riordan to make the deal with the Indians.

A love story also develops, as the beautiful Baltimore gal Julie McCloud (Rhonda Fleming) married Sam when Vancedumped her for the cause. She gets unduly upset when she meets Jeb and later discovers Vance is in these parts, and walks out on her hubby because he’s a creep who sells bad liquor and guns to the Indians. When Sam gets killed by Geronimo because he cheats the Indians and Geronimo gets arrested by the marshal, the Apache’s Chief Grey Cloud warns the white men to release Geronimo and let the Indians decide his fate or else face an all-out Indian attack. When this arrangement can’t be met, the Indians attack the settlement.

The feuding brothers fight on the same side again, and Vance proves to Julie he’s a good guy and worthy of her renewed love. There’s no kissing, the action scenes were only mildly diverting, and the acting was ham-fisted. Reagan plays the Southern gentleman officer with a Yankee accent. The attempts to draw comedy from an obese city politician (Lloyd Corrigan) dressed in a suit and a high hat sent West to the settlement as an expediter in the Indian affairs, were awkward and hardly funny. When I say this Western was routine, I mean it was really routine. 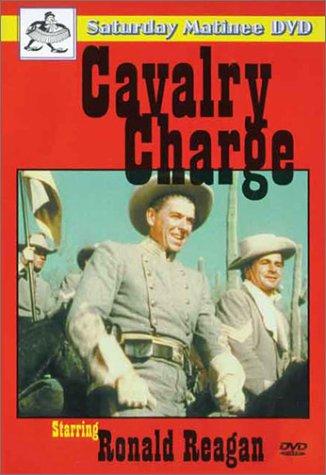