A fine production about the fall of Norway during Germany’s invasion in 1940. It tells the historical tale of Norway’s quick capitulation to the Nazi forces. It questions the military leader’s decision not to even fire a shot. That seemed hard to believe, considering they had an armed force of some three thousand. It is seen through the eyes of a senior citizen in his sixties, Thor Espedal (Espen Skjonberg), who just retired from the merchant marines. He is spurred onto action by the death of his friend at the hands of the Nazis. His enlistment for patriotic reasons even astonishes his wife Anna (Rut), as well as the younger soldiers. The result is a straightforward, old-fashioned drama that shows the old man’s mettle and crustiness, in a film noted solely for Espen Skjonberg’ sterling performance.

The film ably depicts the peaceful nature of the Norwegian people and how they found war to be a very difficult position for them to be in and how confused everyone was at the time, as there was a lack of leadership from the top.

Thor makes love to his wife and then goes to Army HQ. There is mass confusion there. But that doesn’t stop the men from laughing at Thor, who is dressed in his outdated uniform and is so much older than anyone else at headquarters.

Thor wins the soldiers over when he detonates a bridge and stays on to fight a Resistance campaign in the hills with a cowardly captain (Larssen) in charge, who decides to leave when the Norwegian commanding general surrenders to the Germans. Thor takes over command, putting together a purely volunteer amateur army. He is joined by a socialist, Krogh (Sund-quist), who in civilian life is an engineer. Krogh has recently returned from Spain, where he fought the Fascists in the Civil War and has lost his citizenship because of that.

The only battle scene that is emphasized, is when the Resistance fighters ambush a German patrol and capture 150 Germans. But after that victory, reality sets in and the men are fearful that the Germans will send in a brigade and destroy them. Thor gives the volunteers a choice of going home or fighting. The volunteers have lost their taste for battle, so they scatter and return to their homes. Thor remains alone, waiting for the Germans to come. The scene was carefully done, showing the unsaid fear that swept over their camp when the men realized they might become martyrs if they stayed.

The Last Lieutenant doesn’t have anything new to say; but, what it says about one’s loyalty to country and how its military leaders were faced with difficult decisions, was deftly handled by first-time director Hans Petter Moland. It is a film for those who want to see a different approach to war films, one where the study of character is more important than the battle scenes and the arguments of ideology. The film’s only problem was that its story just wasn’t that exciting. 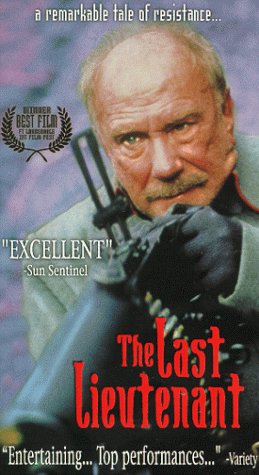