Bleak but well-presented Western, set in the Dakotas of the 1880s, by writer-director Richard Brooks (“The Professionals”/”Bite the Bullet”). This was the first of his three Westerns. It’s based on the novel by Milton Lott. Former screenwriter Brooks’ famous quote is “First comes the word, then everything else.” The film is not for the squeamish, as the killing of the buffalo is real–done by sharpshooters hired by the government to thin out the herd. It’s an angry indictment at the wasteful and senseless slaughter of the buffalo by the white man and debunks the heroic myth of the frontier pioneer.

The film opens by stating that in 1853 there were 60 million buffalo in the West, but some 30 years later only 30 thousand. Weary ex-buffalo hunter Sandy McKenzie (Stewart Granger) only wanted to make enough money to support his small cattle ranch, and sadly muses that he killed so many buffalo and has nothing to show for it. Along comes gunman Charlie Gilson (Robert Taylor), who’s not a hunter but proposes a partnership with the experienced hunter Sandy. Charlie talks the reluctant Sandy into agreeing by stating there’s big money in town paid for buffalo hides, and Sandy decides to take the easy money since he already has a guilty conscience. They hire a tracker and skinner in half-breed redhead Jimmy (Russ Tamblyn), who is running away from the reservation, and the one-legged drunkard and grizzled old timer Woodfoot (Lloyd Nolan). The combo has a built-in tension since it soon becomes apparent Charlie is a sadistic killer, a despicable person, a spiritless hunter and an avowed Indian hater, who says such monstrous things as “Killing is the only thing that makes you feel alive” and who agrees with the sentiment “One less buffalo means one less Indian.”

When an Indian steals the mules from the hunter’s camp, Charlie goes gunning for the Indians responsible and slays them. He brings back the mules and a beautiful Indian maiden (Debra Paget) with a child. Despite his hatred of Indians, he forces a relationship on the stoic maiden and incurs the hatred of Sandy who has fallen for her. Their conflict picks up intensity when a valuable white buffalo hide is taken by Charlie, who will not give it up to an Indian who comes offering to trade his Indian ponies for it. Charlie refuses to understand the significance of the pelt to the Indians as a spiritual offering to their gods, and it leads to tragic consequences.

After participating in the wholesale slaughter of a herd of buffalo, the rivals have a falling out which leads to a climactic showdown. Fast-draw Charlie waits outside overnight in the bitter cold, while Sandy sleeps in the mountain cave with the maiden and Jimmy. On the morning of the showdown, Sandy finds that Charlie froze to death.

It’s an impressive Western, one that is marvelously photographed by cinematographer Russell Harlan and eerily effective in delivering its chilling message. It might be Taylor’s best performance ever, I can’t think offhand of him in better form. 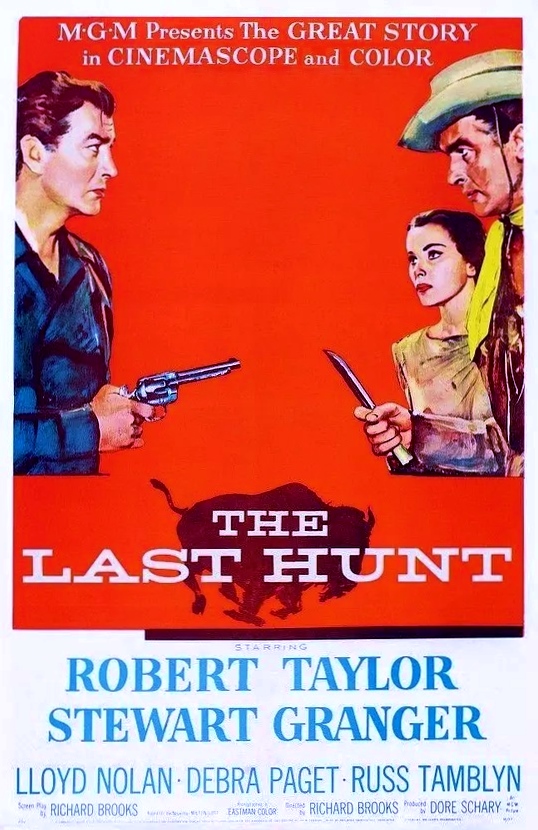