The Marvel Comic based story is co-scripted for film by veteran director James Mangold (“Walk the Line”/”Cop Land”), Scott Frank and Michael Green. It’s loosely based on the Marvel Comic “Old Man Logan” by Mark Millar and Steve McNiven. The drama is framed like a neo-Western (pays homage to the 1953 Shane, with Alan Ladd in a film clip telling us the gun is only as good as the person using it).

The third ‘Wolverine,’ in the X Men franchise, is set in 2029, and is the tenth time Hugh Jackman has played him. The film finds the mutant Wolverine’s powers on the decline due to a toxin in his system. Also, alarmingly there have been no known mutant births in 25 years.

In an abandoned smelting plant on the outskirts of El Paso, Texas, a border town, dwells a boozing, world-weary, physically weakened, unable to heal fast as before, gimpy Logan (Hugh Jackman), formerly the clawed slasher Wolverine. He ekes out a living as a limo chauffeur. The only X-Men mutants remaining are Logan, the nonagenarian, ailing from brain seizures, Professor Xavier (Patrick Stewart), and the albino Caliban (Stephan Merchant). The Professor is a telepathic supermutant and a mentor of the other mutants, while Caliban is a light-sensitive mutant known for tracking his enemies. Both younger mutants care for their kindly mentor in their secret hide-out.

The mysterious Mexico City clinic caretaker, Gabriela (Elizabeth Rodriguez), makes contact with Logan and gives him a wad of cash to escort by car the 11-year-old steely- eyed Laura (Dafne Keen), a sullen, close-mouthed, lab-created mutant girl, with a steel claw, to a rumored new Eden near the Canadian border, a place where maybe young parent-less mutants can find peace (Logan believes Eden is unreal because it was introduced in the Marvel Comic). The girl, Charles and Logan are pursued by a ruthless one-armed bounty hunter (Boyd Holbrook) and his paramilitary cyborgs, sent by the villainous brilliant scientist Dr. Zander Rice (Richard E. Grant) to bring his experiment back to him alive. They have kidnapped Caliban and force him to track the mutants on the run. The gist of the film is in a chase mode.

The evil scientist Rice is the founder of Transigen, a firm operating a sinister bio-engineering program, where the twisted scientist is attempting to raise a new breed of mutants for profit, power and control. He’s viewed as the modern-day Big Pharma corporate bad guy.

It’s the heartfelt performance by Jackman that keeps this last Logan superhero film on the right track. 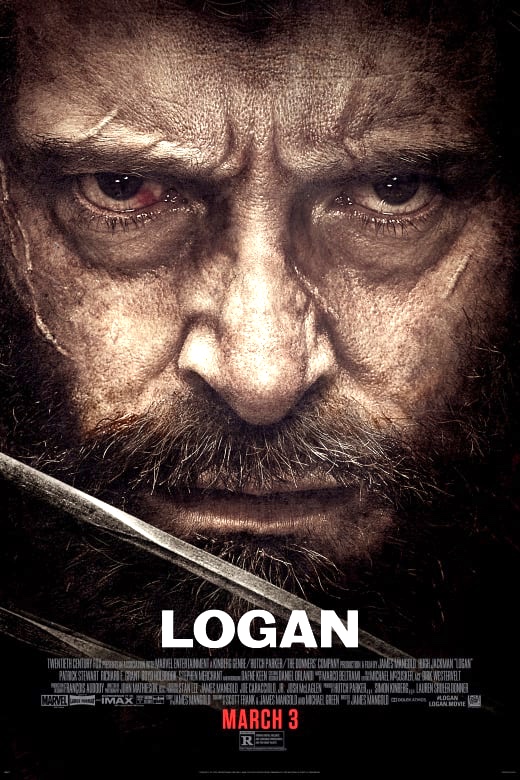