LAST FRONTIER, THE (SAVAGE WILDERNESS, THE)

Anthony Mann (“Bend of the River”/”The Naked Spur”) directs this offbeat and at times muddled Western that uses a familiar theme of a martinet leader whose psychological flaws endanger the men under his command but through the oddball characterizations it assumes a more complex conclusion than what usually happens. It also chronicles the taming of a Noble Savage who is emasculated due to civilization’s rules of conduct. Writers Philip Yordan and Russell S. Hughes adapt it fromthe novel The Gilded Rooster by Richard Emery Roberts. Victor Mature was never more mature; I found this to be his best film performance ever. It also might be Mann’s strangest Western. The film is given a peculiar look, as it’s filmed mostly at night with the camera taking long tracking shots.

It’s set in the Oregon wilderness during the Civil War. Three longtime primitive trapper friends, the jubilant child-like innocent Jed Cooper (Victor Mature ), the pragmatic Irishman Gus (James Whitmore) and the liquor drinking Indian (Pat Hogan), are relieved of their furs, horses and rifles after hunting for a year by Chief Red Cloud, who objects to the cavalry in his territory. The three ride to Fort Shallan to ask the army to repay them for their loss, instead the fort commander, Captain Glenn Riordan (Guy Madison), hires them as civilian scouts. The bearish Jed falls in love with the uniform, which he’s promised if he learns how to be a soldier, and with the lovely wife of Colonel Frank Marston (Robert Preston), the vulnerable Corinna Marston (Anne Bancroft). Hubby is building a fort on the other side of the territory, but returns when the Indians go on the warpath. It’s soon learned that the colonel is a troubled man who craves respect. The West Point grad feels punished to have this second-rate assignment, where all the new recruits are unqualified for their duty. The Colonel lost 1500 men in the Battle of Shiloh, earning the nickname as “The Butcher of Shiloh.” The pig-headed leader takes unnecessary risks because he believes that shows courage and the willingness to win. The Colonel goes against reason and decides to carry the fight to the Indians instead of waiting for reinforcements and the first snow, which would prevent an Indian attack while the men wait it out in safety. In the course of battle the Colonel leads the outnumbered men into an ambush, but Jed has them retreat to the fort back through the woods rather than obey the Colonel’s orders to stand and fight. As a result the Colonel dies in the field with his sword in his hand and most of the men live to fight another day. The sane and competent Captain Riordan is once again in charge of the fort and makes Jed a uniformed sergeant.

The upbeat ending belies the film’s pessimism and dark narrative of wilderness life. The early conversation between Jed and Gus spells out the doomed relationship between the Indians and the white settlers. Jed: We never fished nor killed any more than we could eat. And we’re not Blue Coats. Why are they taking it out on us? Gus: Civilization. Jed: Civilization? Gus: Civilization is creepin’ up on us, lads. The Blue Coats aren’t satisfied with gobblin’ up all the lands east of the ‘Sippi. No, they won’t stop till they’ve pushed us over the Rockies and into the Pacific Ocean. It’s a drownin’ fate that awaits us all. These are calamitous times, Jed, calamitous times. 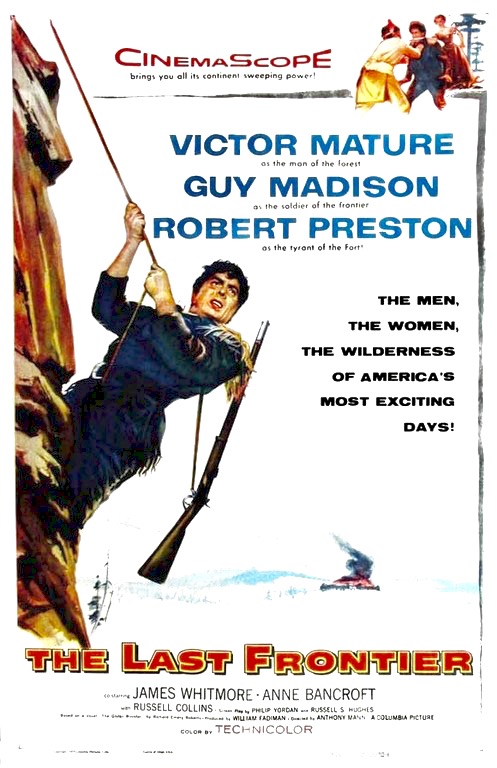