David Noel Bourke is the director/writer and driving force of the Last Exit. The film was shot in 18 days on the streets of Copenhagen, on digital, and for the neat sum of 1,500 US dollars. Hollywood types buy shoes that cost that much. This ambitious, murky, authentically atmospheric neo-film noir is an homage to Brian De Palma’s Scarface and to a university philosophy lecture delivered guerrilla style in the streets. It covers the alternate and dark side of Copenhagen highlighting the desperate lives of a young couple trying to survive their deep personal problems, and was filmed mostly in the red light district of Istedgade and the hippie community of Christiana.

Nigel is a handsome, unshaven troubled young English man, who has run away from his criminal troubles to be in Copenhagen hoping to start over again with better results. He’s stuck in a loveless marriage with the dour Maria, where they live in a rundown apartment and are both in private battling with their drug habits. Nigel gets a job with a crime boss called the President, where he stores 50 boxes of illegal goods in his apartment for two weeks. Working for the crime boss in some unrevealed capacity is Tanya (most likely a prostitute), who leaves with Nigel after his meeting with the boss. He buys her an ice cream, she insists he fucks her; he acts reluctant, but soon succumbs to the sexy woman in her mod apartment.

When scoring grass for Tanya at a later date, Nigel runs into a street drug dealer named Jimmy who acts as a philosopher and wise man and friendly adviser to the confused man. Jimmy gives a capable talk on quantum mechanics, Werner Heisenberg, and the advances made in medicine that have increased the life expectancy. Jimmy senses the lad is in trouble and tries to steer him right, but Nigel is too closed to listen. In fact, Nigel seems to be losing his sense of balance and moving closer to the edge, as things start taking a turn for the worse when he tries to dump Tanya and she attacks him and then slashes her wrists. Meanwhile Maria tries to desperately save the marriage through her pregnancy, but this only freaks Nigel out even more. It’s too late for Nigel to recover as his criminal past catches up with him, and he takes on a ghastly new job for the boss as his life spirals ever downward.

It was a bleak and humorless story shot in the dark with a jarring hand-held camera, as the story was held together on the thin thread that Nigel’s downfall as a regular guy could connect with the viewer and make him an appealing film noir protagonist who fell from grace because he couldn’t deal with his inner demons. Unfortunately the film never loosened up and allowed any light to enter, as I found it increasingly more difficult to take to Nigel as his plight got more intense and his decision making ability disintegrated. But for a film made on such a shoestring budget, the DVD was a first-class professional job as for looks and it showed that Mr. Bourke has the potential to be a solid filmmaker with a good ability to lay down a story. There was a captivating style to the film that could have been better utilized if there was more action or a stronger plot development and less talk. For a plot that wasn’t that complicated, it was made too awkwardly mysterious as scenes dragged on without developing character or getting me more interested in the situation. I think much could be learned from seeing a low-budget film like Edgar G. Ulmer’s 1945 Detour that also used as its dark theme that ‘fate or some mysterious force can put the finger on you for no good reason at all.’ Detour was able to embrace the subversive in a way this film couldn’t. 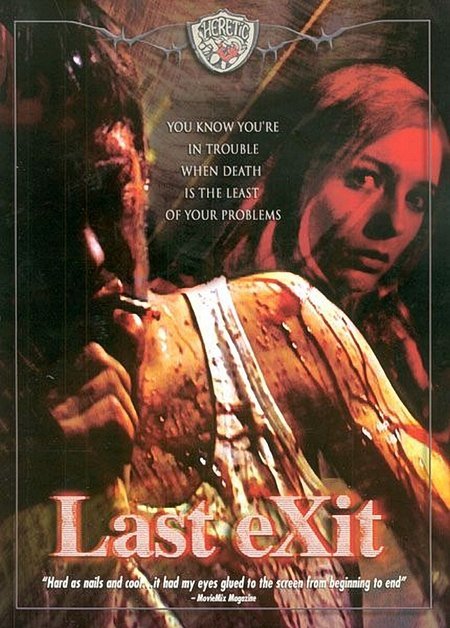