An historical Western that runs roughshod over history, as Warren Duff’s screenplay plays fast and loose with the facts. The film is based on the story by Sy Bartlett. It was the final film directed by the noted Scottish-born Hollywood filmmaker Frank Lloyd (“The Divine Lady”/”Wells Fargo”/”Cavalcade”), who is largely forgotten today but back in the day won a few Oscars for directing. This was a project John Wayne was long interested in getting Republic to make for him, but they refused to make it in the big-budget way Wayne had in mind. When they finally decided to make it, they offered Wayne a puny contract and when he turned it down they made it anyway—some say to spite him. It ended Wayne’s friendship with Republic head Herbert Yates and his connections with the studio. In 1960 Wayne made his big-budget visually splendid The Alamo as director and star with his own production company financing it, and it turned out pretty similar storywise to Republic’s low-budget patriotic one (though Wayne can’t compare with Lloyd as a director).

This is the historical account of the battle of the Alamo in San Antonio, in 1836, where the brave rebellious Texans gave their life to become free of Mexican rule by defending the former mission even though outnumbered thirty to one by the Mexican army of Santa Ana (J. Carrol Naish), the current power-hungry president of Mexico. It’s told from the viewpoint of the wealthy Mexican citizen and rancher, widowed from his Mexican wife, the renown knife fighter and inventor of the Bowie knife, Jim Bowie (Sterling Hayden), who along with Davy Crockett (Arthur Hunnicutt) and William Travis (Richard Carlson) were some of the heroic figures who died in the famous ‘last command.’

It begins by having a cautious Bowie, a close friend of Santa Ana, not taking sides with lawyer Travis and tough guy Mike Radin (Ernest Borgnine), who were outspoken in urging secession from Mexico. Bowie even gets into a knife fight with an irate Radin over this, and wounds him in his arm. Later the two will stand together to fight as friends in the Alamo.

The climax builds to the 187 Texans who hold off an onslaught of 7,000 Mexicans for nearly two weeks. If you’re not bored silly with the build-up to the climax going on seemingly forever, you will be rewarded with a well-staged and exciting final battle. Other noteworthy things about the film include a pleasing performance by a gruff Hayden and an engrossing odd one by Borgnine, who is depicted as if he were a street-smart NYC thug dressed in frontier garb even though we’re told he’s from the Bayou. Also Hunnicutt’s comical Crockett is not like the real Crockett and Anna Maria Alberghetti is rather dull as the love interest of both Hayden and the young sole survivor of the Alamo, Jeb Lacey (Ben Cooper), thanks to being sent out on errand before the battle by the noble Bowie. 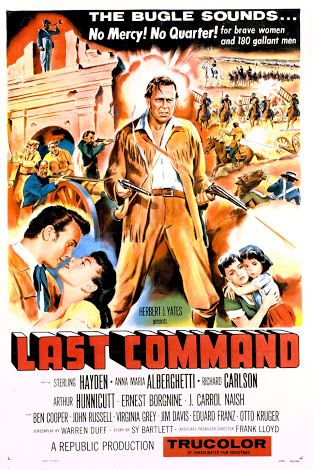