LAND OF COLLEGE PROPHETS, THE

“Should suit an audience looking for something in a horror flick that is as far removed from Hollywood as is Plainville, Connecticut.”

Mike Aransky and Philip Guerette codirect and Thomas Edward Seymour scripts this stupefying sci-fi/fantasy/comedy underground B-movie. It’s a comic book tale about roughnecks, with some of their gray cells still working, who see the light and inherit the mysterious mantle of college prophets to save their small-town of Pharisee (now that’s a great biblical name!) from a wishing well from which an ancient evil force is reawakened. It should suit an audience looking for something in a horror flick that is as far removed from Hollywood as is Plainville, Connecticut, where the Hale Manor Collective is located and where the film was shot. The collective responsible for the film is made up of Thomas Edward Seymour, Mike Aransky and Philip Guerette, whose previous projects included Thrill Kill Jack in Hale Manor and Everything Moves Alone (opened in 2001 in a NYC theater).

The film opens with a quote from Albert Einstein: “Force always attracts men of low morality.” Ironically the narrative will be filled with brawls, blood drippings and puking, and without such physicality there’s no film. The film is given the voiceover treatment by a narrator, who is also the star, a roughneck named Tommy (Thomas Edward Seymour) who lives in Pharisee and attends Robinson Community College. Tommy sticks out because even though he’s not a Catholic priest he wears the priest’s collar (that will be explained later as a gift his father, who was a priest, gave him, so when he puts it on he will stop acting bad). Tommy works his way through college by being the audio/visual guy, where the anti-social dude appropriately works out of the basement. In one instance Tommy shows his bad side by terrifying the timid Professor Annie (Phil Hall), who only asked him for some video equipment. Tommy’s best friend is Rye (Philip Guerette). He’s also a student at Robinson and a brawler with a weird history involving a missing rib. They both hang out in bars and get on their soap box on campus to lecture in an unorthodox style about God, a personal vision that’s far removed from the Bible. Rye works slavish hours at a military-themed fast food place specializing in Sloppy Joes and Navy beans. The two pals hang with the lovely coed Bells (Tina Angelillo), who happens to be Tommy’s main squeeze–someone he says is the best thing to ever happen to him. But when Tommy discovers his pal is screwing the lovely Bells, he challenges his boy to a fight. This violent act seems to have awakened the infamous town well to bring on toxic spirits that seep underground and when the locals drink the water they start going insane. The well has become known through rumor as the Well that Ate Children, as years ago several children disappeared and the locals blamed that on the well. The two rivals are faced with a personal tragedy and decide to forgo their dispute to see if they can break the evil spell before it does further damage. They are helped by the popular Professor Holiday (Carmine Capobianco), their only ally on the staff, who helps with the math, magic and philosophy part while the boys supply the punch needed to restore things back to normal. The boys are surprisingly further helped by their arch enemy Irish Joe (Russ Russo), who sports a pack of Marlboros on one arm and on the other the ace of spades, as they must battle with the newly activated army of evil prophets led by Third Reich Jones (Paul DeSimone). The evil leader turns blue and the reason given by the lads is because of a “lack of circulation. An abnormal case of diabetes.” The mumbo-jumbo final explanation of the prophets about their heroic role is that “Sometimes all that man can do is…fix its own mistakes…in the land of college prophets,” which should let you know how serious to take this strange adventure film even if sprinkled into the tale are heady quotes from illustrious poets such as Robert Frost and Dylan Thomas.

It’s silly fun and has a certain youthful rebellious charm, even though it doesn’t make much sense. 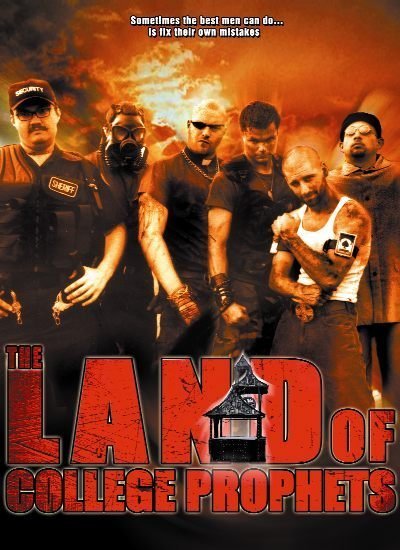