“Pierson wisely lets the mostly Native American cast tell the story the way they know it in their hearts and his unobtrusive direction works out very well.”

White director Frank Pierson (“King of the Gypsies”/”A Star is Born”)and white screenwriter Bill Kerby do a good job telling from the Indian viewpoint the autobiographical book by Mary Crow Dog, a half-white, half-Native woman, that was co-written with Richard Erdoes. In this made for TV movie, financed by Ted Turner, it tells of the struggle of modern day Indiansand their fight for civil rights during their protest at the historical site of Wounded Knee (the site in 1890 where the U.S. cavalry massacred at a camp site 150 men, women, and children of the Lakota Sioux and wounded 51).

Pierson wisely lets the mostly Native American cast tell the story the way they know it in their hearts and his unobtrusive direction works out very well. Everything is seen through the eyes of Mary Crow Dog (Irene Bedard), who had a difficult time growing up on the Pine Ridge Reservation in South Dakota and was expelled from a Catholic boarding school for subversive activities. Returning home to Pine Ridge her re-married conservative nurse mother (Tantoo Cardinal) offered no emotional support. Mary was a lost soul who could find no work and fell in with a rowdy crowd of aimless unemployed Native Americans. When her boyfriend (Richard Swallow) was killed in a car crash, Mary drifted aimlessly until becoming involved with AIM (American Indian Movement) and developed a spiritual awakening, an energy to seek justice for her people and a thirst to explore her roots. The activists were fed up with the hopeless conditions on the reservation, that the tribal group acting as their rep to the government was led by the venal Dick Wilson (August Schellenberg) and were corrupt thugs who betrayed the Indians on the reservation, that a white man was never arrested for killing an Indian while his mother was sentenced to three years in jail for being party to a riot in front of the courthouse, and that the government had never kept its word in all the treaties they signed. The AIM activists, over hundred men and women, occupied Wounded Knee starting in February 1973 and held it for 73 days, until the heavily armed FBI agents and soldiers arrested all of them even though it was a peaceful demonstration. Mary gave birth during the siege. The protesters never received answers why the treaty signed with President Grant was broken, that stated they could live in their sacred land of the Black Hills of South Dakota forever. When the media left after the siege was over, the government reneged on any promises made to help the Indian cause and the activists were further harassed by the government authorities. But the Occupy Wounded Knee protest received world-wide attention and helped call attention to the government lies and their heavy-handed approach in dealing with Indians, who were now part of the civil rights movement.

Irene Bedard, the daughter of an Inupiat Eskimo and a French Canadian/Cree, played Mary Crow Dog with great credibility, passion and pathos. Her starring role gave the film a sympathetic, vulnerable and colorful character the viewer could identify with. Also, the storytelling was excellent; it got things, from all reports, pretty close to the way the siege actually went down. 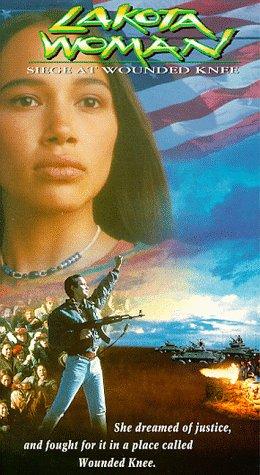