“Skillfully casts its light on the hypocrisies and phony games played by the upper-crusts.”

An early Warner Bros. film for the beginning studio, that turned out to be a big hit. Ernst Lubitsch (“Design For Living”/”Trouble in Paradise”/”If I Had a Million”) adds his lubitsch touch to substitute for the silent’s lost witty dialogue from Oscar Wilde, whose play the film is based on. The notorious playwright’s scandalous comedy of manners is set among the British aristocrats. The screenplay is by Julien Josephson.

After the caddish Lord Darlington (Ronald Colman) startles the married Lady Windermere (May McAvoy) by declaring his love for her, the mysterious Mrs. Erlynne (Irene Rich) returns to London and asks Lord Windermere (Bert Lytell) to meet her to discuss something of vital importance to them. In private she reveals that she’s the long-lost mother of his wife, Lady Windermere, who thought mom was dead. She further explains she had the child out of wedlock, the reason for her disappearance and assures him no one else knows the secret. Mrs. Erlynne persuades Lord Windermere to sponsor her into his elite circle or else she will tell all to his circle of elites. Fearing the worst, the Lord finances Mrs. Erlynne. But the gossipy lady aristocrats begin spreading the word that the much older Mrs. Erlynne is the Lord’s lover, and she’s shunned by the society swells. But the attractive Mrs. Erlynne is pursued at the racetrack by Lord Augustus Lorton (Edward Martindel), who begins a furtive affair with her.

Mrs. Erlynne forces the Lord to invite her to his wife’s birthday party, but when his wife is told by Darlington that hubby is writing checks to the strange lady and she observes it herself, she believes her hubby is having an affair and when she confronts him is told that he’s only helping out a lady in financial need. Lady Windermere sends Mrs. Erlynne a letter to cancel the invitation, but she fails to read the letter and shows up to the party escorted by Lord Lorton. The lively lady becomes the hit of the party, even winning over her most ardent critics. At the party Darlington has success in courting the upset married lady, and after the party she goes to his flat. Mrs. Erlynne follows her to the flat and warns her about making the same mistake she did, which made her a social outcast. When the society men from the party convene in Darlington’s flat, Mrs. Erlynne makes her presence known as Lady Windermere flees unnoticed and when Lady Windermere’s fan is found in the premise, she declares I must have taken it by mistake.

It turns into an austere but amusing morality play that skillfully casts its light on the hypocrisies and phony games played by the upper-crusts, who live a shallow life following their repressive society rules of behavior. 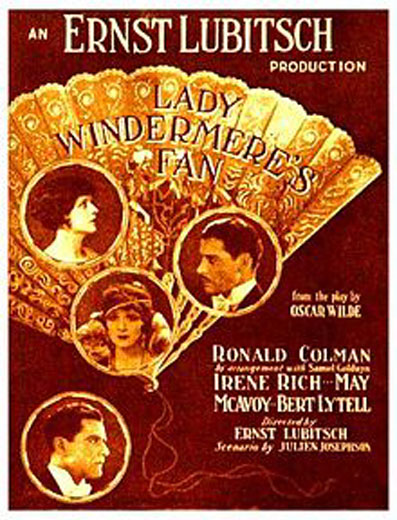