LADY ON A TRAIN

Deanna Durbin sparkles in this farcical murder-mystery, as directed by her future third hubby Charles David. She retired in 1948 after a few box office flops and moved to Paris, where the wealthy woman chose to live in anonymity. The film is derived from a story by Leslie Charteris; the snappy screenplay is by Edmund Beloin and Robert O’Brien. It was previously filmed in Britain as A Window in London.

Nikki Collins (Deanna Durbin) is on a train from her home in San Francisco to visit New York, where her wealthy dad has an office. She’s to be met by her father’s loyal employee Mr. Haskell (Edward Everett Horton), who will act as chaperone for her absentee father who is back home in sunny San Francisco. The avid mystery-buff is engrossed in reading aloud “The Case of the Headless Bride” by Wayne Morgan (David Bruce), as the train is about to pull into Grand Central Station. When the train stops she witnesses from her compartment window a younger man killing an older man by slamming a crowbar on top of his head in a nearby office building. Unfortunately, she never got a look at the murderer’s face since his back was towards her, but she saw the victim clearly as he was facing her. At the station she loses the bumbling Haskell and reports the crime to the police, but it’s Christmas Eve and she’s turned away by the sourpuss desk sergeant as just another kook. But the persistent Ms. Collins then returns to her hotel and calls mystery writer Morgan for assistance, who reluctantly is forced into helping her when she interrupts him while he’s at the movies with his fiancée Joyce. While the newsreel is on Ms. Collins recognizes the murder vic, who is identified as a wealthy shipping magnate named Josiah Waring. His death is reported as an accident occurring when he slipped out of the window on his Long Island estate.

Ms. Collins now goes by herself to the deceased’s estate and ends up being mistaken for the nightclub singer at the Circus Club, Margo Martin, by one of the nephews. This allows her to sit in with the family when family lawyer Wiggam reads the will and Waring’s two eccentric nephews, the irresponsible Arnold (Dan Duryea) and the eccentric Jonathan (Ralph Bellamy), are left $1 each while girlfriend Margo inherits over a million dollars, controlling interest in the business, and the estate. Before Ms. Collins leaves the estate she finds the blood-soaked slippers of the victim’s but must escape from the thug-like chauffeur (Allen Jenkins) and the creepy manager of the CottonClub,Mr. Saunders (George Coulouris), who unsuccessfully try to get back the incriminating slippers and prevent her from leaving.

Ms. Collins goes to the Cotton Club and soon discovers Margo has been murdered and her life is in danger, as the real killer is one of the nephews–the one who gives Saunders his marching orders. When Ms. Collins is trapped alone with the killer, in the same office where the murder occurred, the inept Morgan comes to her rescue but jumps the wrong nephew. She narrowly averts a disaster, as New York’s Finest have been trailing the writer and arrive just in time.

Durbin gets a chance to belt out a few tunes, and does a touching version of “Silent Night” and a steamy nightclub number “Gimme a Little Kiss, Will You Huh?” The tongue-in-cheek comedy antics parody crime writer Cornell Woolrich, as the film remains bubbly until the dark moments when Durbin is cornered by the killer. Film noir conventions are satisfactorily tacked on to the music and comedy, allowing it to be uniquely viewed as a highly entertaining noir/comedy. 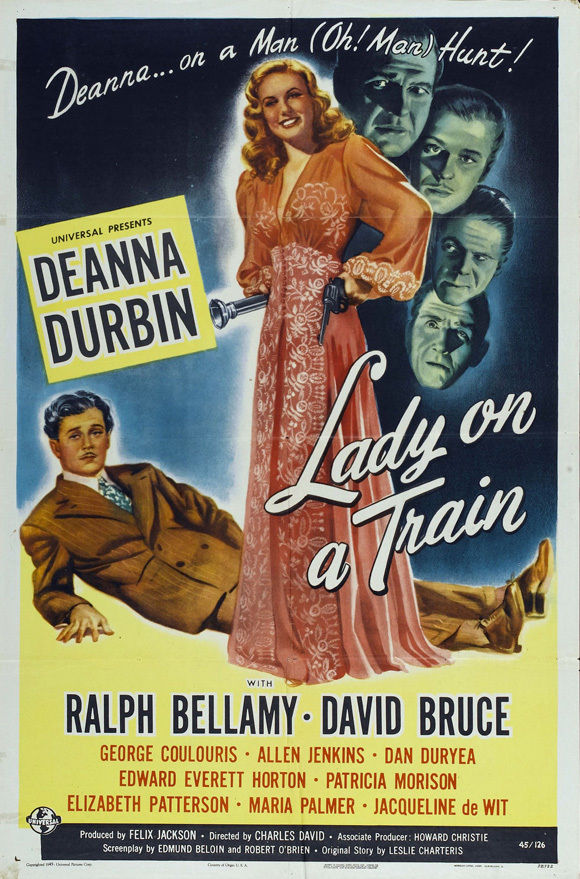