“Not much to like in this passable actioner, except for Wayne.”

German-born director Bernard Vorhaus helms this plodding Republic Pictures programmer. It was the studio’s most expensive production to date. It’s based on the story by Edward James & Francis Edward Faragoh and written by Vera Caspary, Michael Hogan and Guy Endore. John Wayne plays idealistic lawyer John Reynolds who is called from Memphis to New Orleans by old family friend Blanche Brunot (Helen Westley). The elderly society lady wants him to shut down the corrupt lottery run in New Orleans. On the boat over to New Orleans John meets the attractive Julie Mirbeau (Ona Munso), but doesn’t know her father General Mirbeau (Henry Stephenson) runs the lottery. This puts a strain on their romance, as John discovers the lottery is part of organized crime and won’t stop his investigation. John through citizen petitions gets appointed by the mayor as special city attorney, and immediately connects the lottery to the murder of a prize winner (Shimen Ruskin) and the paying of protection money. The General discovers his underling Blackie Williams (Ray Middleton) is a cheat and fires him, in revenge Blackie has his henchman Cuffy Brown (Jack Pennick) murder the General and make it look as if it was done by demonstrators of the anti-lottery movement. Julie blames John and mistakenly takes solace with the crooked Blackie, who seizes control of the lottery game and makes it openly crooked. John gets the scared business people to testify against Blackie’s gang by offering police protection. Julie discovers her future hubby Blackie in the arms of bar owner Pearl (Jacqueline Dalya) and soon sees the truth that Blackie is a crook. In the nick of time Julie helps John by testifying against the baddies in court and the two become lovers again.

Not much to like in this passable actioner, except for Wayne as the good guy hero. Of interest, the trial against Blackie’s gang is halted as a levee breaks during a rain storm and floods the entire city (an eerie reminder of Hurricane Katrina). The flood has biblical overtones as the baddies are drowned while the good people are saved. 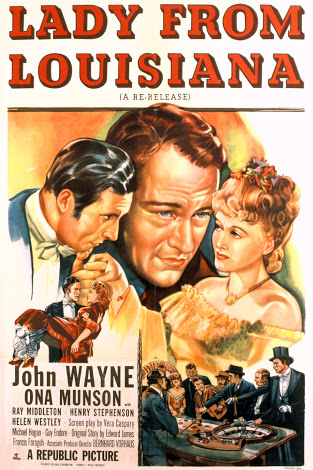