LADY FOR A NIGHT

Jenny Blake (Joan Blondell) is the wealthy owner of the Memphis Belle, a gambling ship moored just outside New Orleans. Jenny’s gambling partner is local political boss Jack Morgan (John Wayne). He rigs it so she gets elected the coveted title of Queen of the Memphis Mardi Gras, but the society folks walk out. Though Jenny loves Morgan, she marries for social status nice guy alcoholic socialite Alan Alderson (Ray Middleton). His family plantation, “The Shadows,” is bankrupt and she trades her wealth for social position when she cancels his huge gambling debt if he marries her. But his family rejects her. The father (Philip Merivale) treats her as if she were a leper, his Aunt Julia (Blanche Yurka) is filled with hatred; only Julia’s sister Katherine shows any kindness. A ball given to present Jenny to society is not attended when Julia urges them not to, but Morgan interferes and blackmails the guests to arrive. Julia is so mean-spirited, that she gives Jenny a gift of a blind horse. Things come to a head when Alan is found poisoned and Jenny stands trial as the accused murderer. Morgan loyally stands by her side, as Jenny realizes her mistake was trying to be something she wasn’t and that the upper-class she was trying to crack are a bunch of bigoted losers.

Lady for a Night is dull and predictable fare. The comedy doesn’t come off and the belated murder plot offers no suspense. It’s flatly directed by Leigh Jason, based on a story by Garrett Fort and written by Isabel Dawn and Boyce DeGaw. Hattie Noel plays a Mammy that reminds one of Hattie McDaniel in Gone with the Wind. 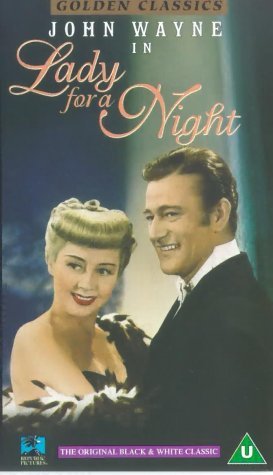