LADY AND THE DUKE, THE (L’Anglaise et le duc)

“Despite the film’s shortcomings, it’s still a solid effort and a thought-provoking look at idealism gone wrong.”

A clinical look at the aftermath of the French Revolution. Longtime New Wave French director, now 82, Eric Rohmer (Marquise of O/Perceval), uses Scotland’s Grace Elliott’s memoirs of living through that period, “Journal of My Life During the French Revolution”, to explore how the aristocracy were treated by the Jacobins and Robespierre.

Grace (Lucy Russell) had a bastard daughter by the future king of England, the Prince of Wales, George 1V, and this was followed by a romance with the Duke of Orléans, Philippe (Dreyfus). When that romance fizzled she remained in France and adopted that country as her homeland. She was much in admiration of the monarchy and kept up a close friendship with the courteous Duke, but one that became noted for their different political viewpoints. His cousin was King Louis XVI, but he distanced himself from his rule as he felt the king betrayed his oath to the nation and that he, Philippe, is the true national patriot sympathetic to the cause of the revolution. Though the Duke still remains a constitutional monarchist, and is not quite ready to yield his title. The joke Rohmer might be having, is that the lady’s a foreigner but is more loyal to the monarchy than is the irresolute Frenchman whose blue blood runs deep.

This low-budget film, shot mostly indoors as the director felt the Paris of the 18th century no longer existed, is a long drawn-out running political debate between the headstrong Grace’s staunch support for the Royalists and the decent Duke’s belief that things had to change. Though the irony is that despite their opposing views, they are both in grave danger from the thugs and petty small-minded power seekers who are bent on exacting revenge on the aristocrats. She doesn’t help herself by being publicly outspoken in her support for the king, and his outward political moves to appease the new citizen powers also seems to be a treacherous course to follow.

History is always viewed only from Grace’s perspective, as she observes from afar the chilling revolutionary celebrations of 1790, the Tuileries aflame, the Second Revolution and September Massacres of 1792, and the regicide and Reign of Terror in 1793.

When the movie is filmed outside, Rohmer used a novel approach. He commissioned the artist Jean-Baptiste Marot to paintbeautiful soft colored classic styles of French matte backdrops onto which the characters have been digitally superimposed, after the actors performed before a blank screen. This artificial DV look made everything seem unreal even though it was authentic, as Rohmer was making the point that history is always arbitrary and subject to many interpretations. It made for an interesting idea, but it didn’t help the film come to life. Dullness and sternness seemed to be the revolutionary atmosphere most prevailing, as the film always felt sluggish and reactionary. It never felt like it was more than a gimmicky theater production with lots of chatter, as it was beating a dead horse by constantly showing the vile and murderous nature of the so-called ‘enlightened philosophers’ and the rabble who misused their new power to gleefully chop off the heads of their former rulers by guillotine and parade them in the streets of Paris. In one such sordid incident, Grace while in a carriage has one of the rabble show her up close the head of her friend, the Princesse de Lamballe, that he’s carrying around on the end of a stake.

Grace escapes to the countryside of Meudon to live out these terrible days in solitude and refuses the advice of the Duke to flee to England, but she returns to Paris to do a favor for an aristocratic lady friend, Madame Meyler, as she’s asked to hide a nouveau aristocrat, Champcenetz (Léonard Cobiant), who escaped the executioner. She hides the wounded fugitive in her boudoir under her mattress at great danger to herself, even though he’s a rival of the Duke. The film goes into great detail of how frightening it was to have her Paris home continually searched by the citizen soldiers. She will later go to trial because of a letter received from an Englishman, as petty functionaries from the Committee of Public Safety try to show that she’s an enemy of the Revolution. But despite her outspoken love for the monarchy she survives, while the Duke watches his dreams go up in smoke as his vote in the Assembly for the king to die does not help him escape the tyranny of the revolution he favored.

Despite the film’s shortcomings, it’s still a solid effort and a thought-provoking look at idealism gone wrong. It’s a dry history lesson that is more concerned with the imperious Grace’s view on her personal relationships with her servants, former lover, peers, and enemies, than with the actual revolution. But there is not one false note to the history, as Rohmer paints a stately landscape of love, honor, and virtue onto a troubling period. His film is always arty, decorous and passionate, as it reflects on the political terrors of the new world and the director’s anti-revolutionary feelings. It was somewhat influenced by D. W. Griffith’s large-scale epic “Orphans of the Storm,” but instead Rohmer made a more intimate film. 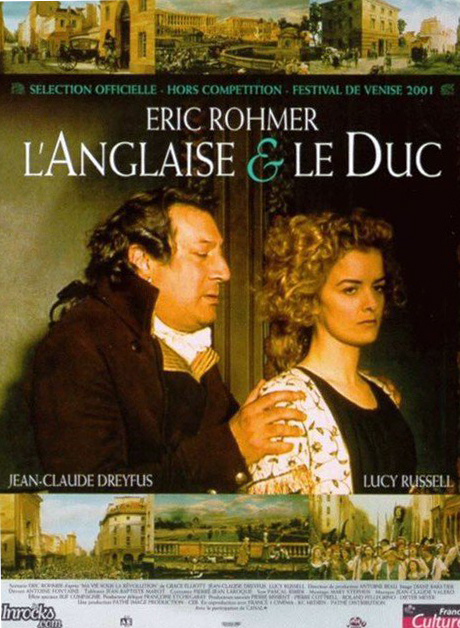